Aquavit Guide: An Introduction to the Nordic Water of Life

By Thijs Klaverstijn
January 2, 2021
Save

The French produce eau-de-vie, while the Scottish take pride in their uisge beatha. Both are well-known examples of the water of life, but the Nordic countries have their own variation called aquavit, which is gaining in popularity across the United States. Below you will find our aquavit guide explaining what it is, who is making it, and how to drink it.

In its most basic form, aquavit—or akvavit—is a spirit drink that has to be either caraway or dill driven, but also incorporates other botanicals. Cardamom, anise, fennel and lemon or orange peel are all commonly used. Aquavit is usually distilled from either grain or potatoes and has been produced in Scandinavian countries since the 16th century. It can be either aged or unaged.

“Aquavit plays along the same notes as gin but is different,” explains Odd Strandbakken, bar manager at HIMKOK, the Oslo bar-slash-aquavit-distillery that is the region’s highest entry in the World’s 50 Best Bars. “Think of it as bourbon and Scotch whisky. There are similarities and shared traditions, but different ingredients and uses.”

There are basically three schools of thought when it comes to aquavit, each stemming from Scandinavia in some way, shape or form. As always, these are simply guidelines and there are plenty of exceptions to the rule. One only has to look at HIMKOK’s own aquavit, which is modern but unaged, and therefore doesn’t qualify as Norse aquavit under European regulations, despite the fact that it’s made in Norway.

Norse aquavit is made with potato spirit, has to age for at least a year in oak, and is usually served at room temperature.

The Danes use grain spirit as their base, prefer a strong caraway aroma and traditionally serve their aquavit cold.

Swedish aquavit is also distilled from grains, and short aging is not an unusual practice. Additionally, it is commonly consumed during midsummer festivities, though it is consumed year round.

Aquavit is not necessarily Scandinavian, even though the spirit and idea itself is. Production of aquavit isn’t restricted to a certain region, like with Scotch whisky or Cognac. Just like gin, aquavit can be produced around the world, giving this spirit a lot of potential for growth. American distillers especially seem to embrace aquavit. In the United States, any “caraway-flavored distilled spirits product” can be called aquavit, which leaves plenty of room for experimentation.

“I think it is great”, says Strandbakken of the burgeoning aquavit production in the US. “I mean, it’s a young category still. A few of them haven’t tried many Scandinavian aquavits, so they’re flying blind sometimes. It can also be expensive to get fresh, good caraway in the United States. So, they’re trying to find their own style and I can appreciate that. As long as they’re selling it and people are enjoying it, I’m happy.”

There are currently dozens of American varieties of aquavit. Many originate from regions with a large Scandinavian population, including the Pacific Northwest and Midwest. House Spirits (best known for Aviation Gin) from Portland, Oregon, was one of the first to introduce their own aquavit in 2006. Intended as just an experiment by co-owner Christian Krogstad, he received great feedback from bartenders and in the end decided to release his aquavit commercially. Aquavit is also made in places like Michigan, Minnesota, Chicago, California and even Texas.

HIMKOK has helped change the perception of aquavit in Norway, showcasing aquavit in new and interesting cocktails. Outside of the Nordic countries, bartenders didn’t have to fight any cultural association with aquavit. Instead, they simply had to discover it. One of its earliest advocates was Jim Meehan when he included six aquavit recipes in his The PDT Cocktail Book in 2011. “Now, if you take a look at the best bars around the world, there is an aquavit cocktail on almost every single menu”, says Strandbakken. “It’s not because we’ve been pushing for it, but because it is an interesting spirit.”

Aquavit is a broad category and there are many ways to incorporate it into cocktails. Some expressions are extremely dill-forward and are great for fresh, Mojito-like cocktails. “You also have unaged aquavit like Lysholm No. 52 or our own HIMKOK Aquavit, that can be substituted for gin, maybe in a Martini or Tom Collins,” says Strandbakken. Long-aged aquavits are great in an Old Fashioned or Sazerac as a replacement for rye whiskey.”

Build in a highball glass filled with cubed ice and top it up with Elderflower Tonic. Garnish with pine and lime.

Pour ingredients into an ice-filled mug/glass and stir. Top up with ginger beer and garnish with lime and/or mint.

Hopefully this aquavit guide has set you on the path to trying this delicious and interesting spirit yourself. 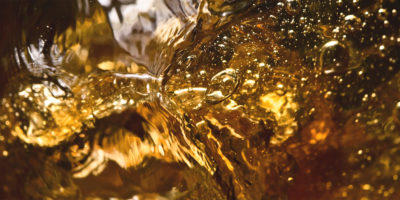 Why Infusing Whiskey Is Gaining Popularity
Across the country, mixologists are adding new ingredients to your favorite whiskeys