Distiller.com uses cookies that are essential for us to operate the website and that are helpful for us to improve the services. By continuing to browse our website, you agree to first-party and third-party cookies being stored on your device. Learn More About Cookies
How Water Affects Whiskey
By Thijs Klaverstijn
September 3, 2020

It’s not called “water of life” for nothing—water plays an incredibly important role in the production of whiskey. However, there’s some debate about just how much water affects whiskey with regards to its taste. Not much, seems to be the consensus. Then again, water might well be integral.

The easy argument is this: a standard bottle of whiskey contains up to 60% percent of water. That’s a lot and it suggests that water greatly impacts our sensory experience of whiskey. It’s also a bit too simplistic. However, each distillery has its own water source, varying from a river to a stream, a loch or a spring. Sometimes they even tap into the public supply. This variation ensures that the characteristics of source water largely differ per distillery. The uniqueness of their water actually is a point of emphasis for many distilleries—used often in press releases or referenced during distillery tours. Albeit it without much scientific evidence.

Distilleries are rightly proud of their water source. A constant supply of water is paramount. For example, during prolonged dry periods certain distilleries have to put production on hold, as has happened in Scotland in recent years. When there’s no water, everything comes to a crashing halt. Water is used for malting, mashing and diluting the spirit before bottling (except for cask strength releases). Water is also used indirectly for cooling and to steam-power pot stills. However, trying to establish how much of the water’s attributes influence the final product, is wildly difficult.

First off, not many distilleries malt their own barley anymore. Furthermore, bottling is also mostly done off site at huge bottlings plants. As a result, the water used for dilution often doesn’t have much of a relation to the actual distillery. So, for the purposes of this article, we’ll take a closer look at the most direct use of a distillery’s water source: mashing. During this process the malt is turned into a fermentable sugary liquid, the so-called wort.

Smoke on the Water

One persistent myth surrounding Scotch whisky is the peatiness of certain distilleries’ water sources. This allegedly is where some Scotch whiskies get their smoky flavors from. Admittedly, there are burns that flow through peaty Highland regions. Once it’s made its way to the distillery, the water can be brownish and peat phenols may indeed be found. Examples are Tobermory and Jura.

You might even be able to distinguish some peat compounds from mashing water that survived distillation. But you’d have to be a super-taster as their presence is pretty much negligible. Instead, kilning is responsible for introducing smoke to whiskey—a process where malted barley is dried with peat smoke.

Then there’s the distinction between hard and soft water. While there are some exceptions, most Scottish distilleries use surface water, which therefore is soft water. Alternatively, limestone water is part of almost any brand’s story in Kentucky. This mineral-rich hard water is sometimes referred to as bourbon’s “secret ingredient.” Hardness of water is measured by the amount of dissolved mineral salts, mainly calcium—although iron, magnesium and zinc are also part of this group. The extent to which these minerals are present can influence the mouthfeel and flavor of whiskey. It also impacts the efficiency of the fermentation, during which the foundation of a whiskey’s flavor is built.

Research conducted by Dr. Craig Wilson, master blender for Diageo, showed that differences in sensory character can be attributed to the source water. The softer waters in Speyside generally produced heavier spirits. Whereas harder waters found on Islay, Highlands, and to a lesser degree the Lowlands, produced lighter, sweeter spirits. Water with more organic matter (like peat phenols) and less minerals produced more esters during fermentation—compounds that are in large part responsible for fruity flavors in your whiskey.

Knowing all this, it still is difficult to quantify the exact influence of a distillery’s water source on the final flavor of its whiskey. Whiskey production is fiercely complex with every little thing interconnected. Small tweaks at the start of production can have a big impact—it’s not that different from the butterfly effect.

Because unique water is a key part of the process, it at the very least contributes to the wide range of whiskey styles found in Scotland and across the world.

Now that you’ve learned how water affects whiskey, it’s time to taste it for yourself. 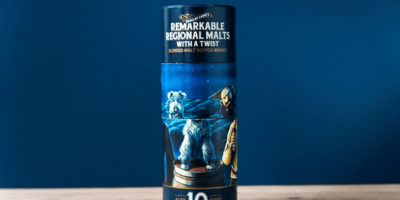 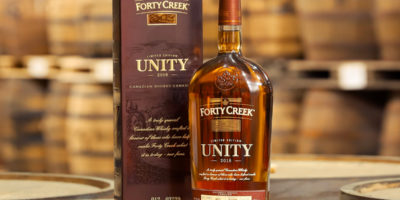 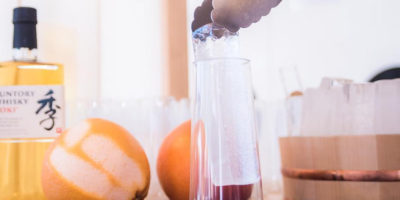 The Highball Machine – Coming to a Bar Near You
Try this simplistic cocktail elevated, by science!