Officially, there are only a couple of weeks left of spring. However, if this week’s booze news is any indication, it’s not too late to explore some seasonal growth and change.

Appleton Estate is releasing a new 15 Year Black River Casks expression as it also revamps its 21 Year offering. Meanwhile, in whiskey news, Booker’s has released Batch 2021-02 “Tagalong Batch”, and J. Rieger’s 2021 Monogram is a departure of sorts from its previous bottlings. This news comes as A. Smith Bowman adds a cask strength bourbon to its core range.

In this week’s RTD news, Luxardo (now in its 200th year!) has rolled out 3 canned cocktail expressions. Plus we have the details on Buffalo Trace’s annual 5K Race, which is virtual again this year.

Speaking of running, you might want to lace up your whiskey-buying shoes when you read our lead story about the developments just announced at Westland Distillery. Consider this your preparation for what might come as a bit of a shock.

On your marks, get set, let’s go to the booze news!

After 10 years as a leader in American single malt whiskey, Westland Distillery has announced an overhaul to its range. This begins with the introduction of a new flagship whiskey which is rolling out now: Westland American Single Malt Whiskey. Its 100% barley mash bill is made up of Washington select pale malt, Munich malt, extra special malt, pale chocolate malt, brown malt and Baird’s heavily peated malt, fermented with Belgian brewer’s yeast.

“While this new flagship whiskey shares DNA with our American Oak expression, it is certainly a new creation altogether,” says a rep for the distillery. “All of our whiskeys reflect Westland’s fundamental house style but each also has its own unique identity. This whiskey is no different.” 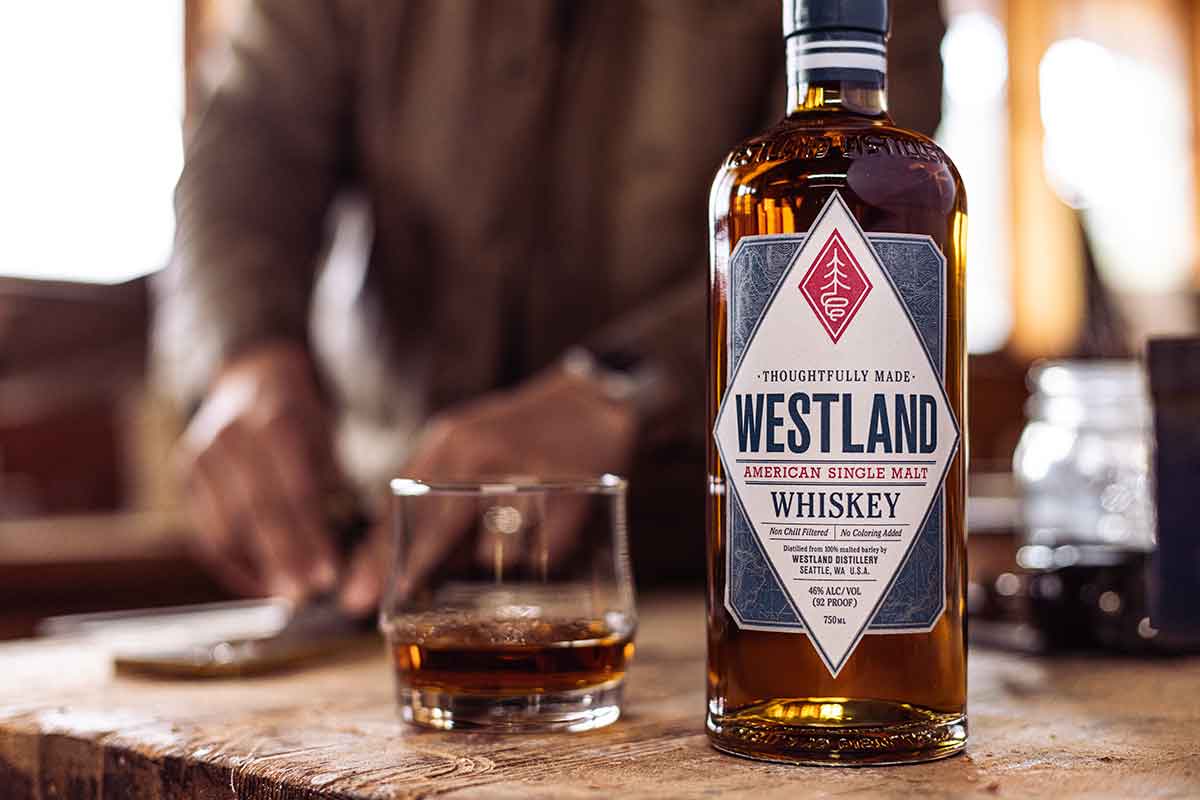 So what’s happening to American Oak, Peated and Sherry Wood? First off, that lineup is now being referred to as the “Heritage Range.” And if you love them, you’d better act fast because the distillery says, despite a collective “great love for them,” those whiskeys will be disappearing from shelves imminently.

The press release explains, “…our new flagship expression will become the main entry point into the world of Westland with our acclaimed Outpost Range taking on a larger role.” But here’s more insight into why: “Sherry Wood is made using casks that, by their very nature, are unsustainable. If the sherry industry continues to struggle, the supply of quality sherry casks will ultimately dry up. If it rebounds like we hope it will, bodegas will have no reason to sell what casks they do have left. Either way, inevitably our hand will be forced. Regarding Peated, our work to develop a reliable and compelling supply of malt grown and peated locally in Washington State gives us a reason to step away from imported peated malt from Scotland for future production. In our ongoing pursuit of terroir in whiskey, this is an obvious choice and natural progression.”

A rep for the distillery states this doesn’t mean it will cease production of peated and sherried whiskeys. For one thing the new expression contains a bit of each of those types of whiskeys in the mix. Also peated malt and sherry casks will continue to play a role in other expressions.

So this flagship whiskey, do you call it a peated malt? Sherried malt? They say neither, because so little of those elements are used in the final cask blend

So, in other words, let’s just leave it at “Westland American Single Malt.”

“Tagalong Batch” is the second release in 2021 for the Booker’s Batch program. For those unfamiliar, this is a series dedicated to late Master Distiller Booker Noe, father of Fred Noe. Furthermore the bourbons are released as single barrel picks at barrel strength. The full-bodied might of the bourbons is meant to match Noe’s presence and personality.

Each one recalls a specific memory, personality or occasion from his life. This one harkens back to when young Booker would tag along to the distillery with his dad — none other than Jim Beam himself — to learn the ropes. Later, Fred Noe and then his son Freddie, would learn their trade with the same tagalong type of apprenticeships.

Uncut and unfiltered, the whiskey is bottled at 127.9 proof and was matured exactly six years and five months. It has an SRP of $89.99. 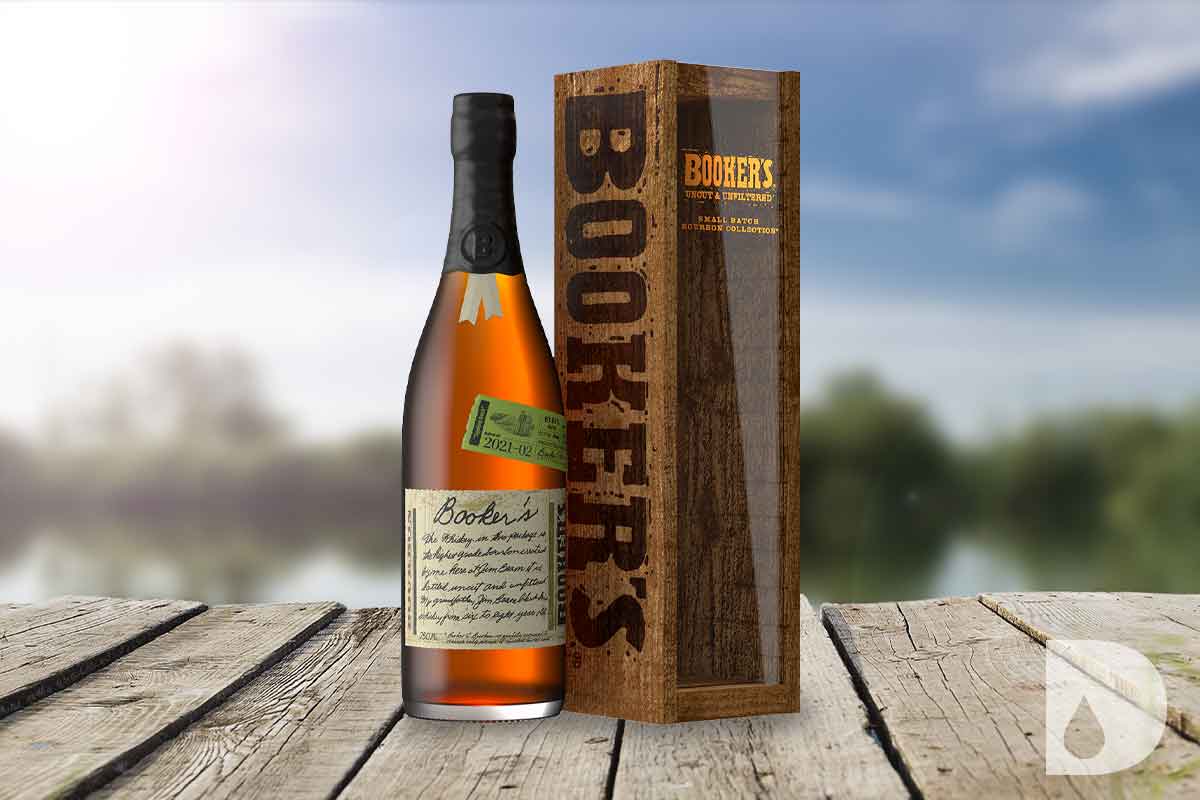 Appleton Estate has announced two updates to its premium rum lineup with 15 Year Black River Casks, and an update to the existing 21 Year, now called 21 Year Nassau Valley Casks. Both showcase the work of Master Blender Joy Spence, who this year is celebrating her 40th anniversary with the Jamaican distillery.

The 15-year-old is named for the Black River in Jamaica’s Nassau Valley, the source of the limestone-filtered water used to proof Appleton Estate rum. It is bottled at 43% ABV.

“The rum that we hand-selected for the 15 Year Old is used to create a rare blend of pot and column-still rums resulting in rich and full-bodied finish,” says Spence. “There is a delicate spice with a fruity subtle oak ending that reflects the lush and fertile land that the Black River runs through here in the Nassau Valley.”

As a follow up to the brand’s recent relaunch, Appleton Estate is reintroducing its 21 Year expression. This rum features a new bottle shape and label that reflects the brand’s heritage. It was first launched in 1996 and named after the Nassau Valley, considered the “heart of Jamaica.” The blend consists of rare and hand-selected pot and column still rums that have all been aged for a minimum of 21 years in the tropical climate of Nassau Valley. 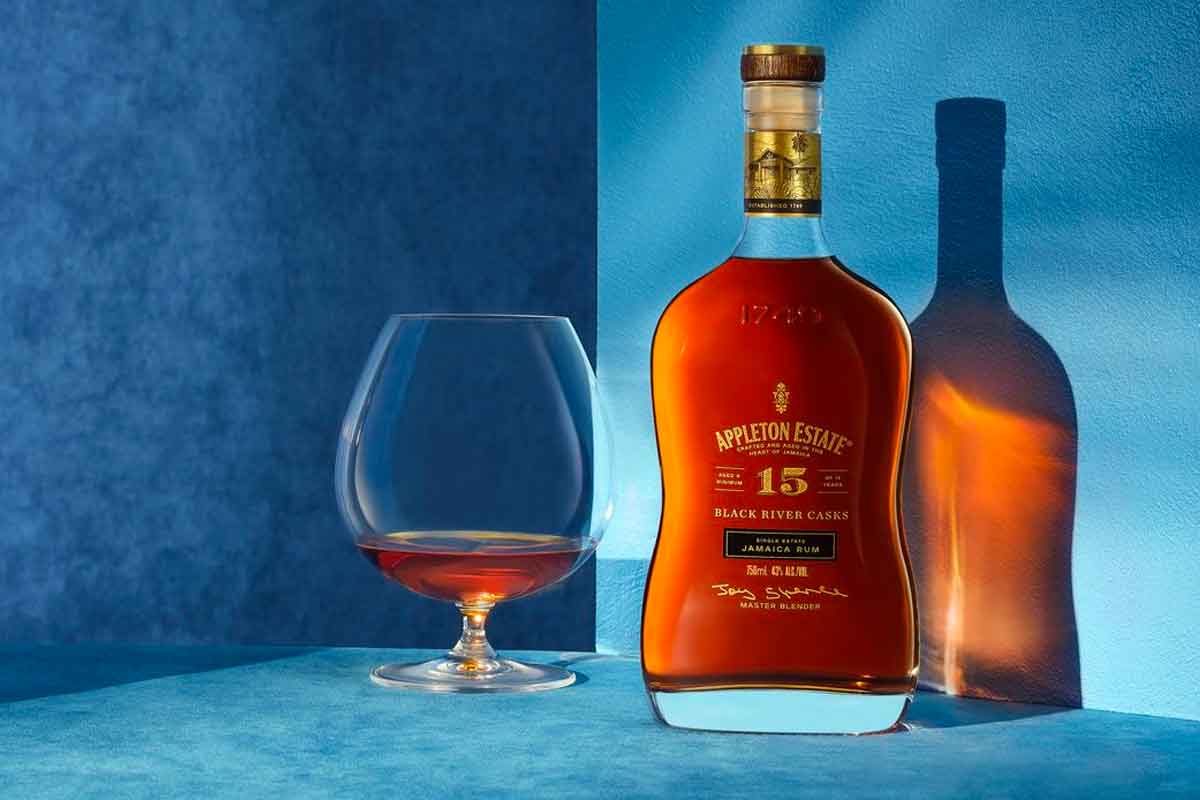 Buffalo Trace Distillery has announced that its 20th annual Great Buffalo Chase 5K will once again be held virtually this summer.

Historically always held on the Fourth of July, the race has attracted top runners from around the world for a scenic run around the vast distillery grounds. “After the heartfelt participation from the first virtual run in 2020, and with participant health and safety in mind, the race will once again be virtually accessible to participants,” says the press release.

“Runners and walkers will participate in this year’s virtual 5K in their hometowns and local neighborhoods wherever they are located during the period of July 2-4 instead of running at the Distillery as the grounds will not be open to participants. Registration is $20, and all proceeds will again benefit the city of Frankfort’s VFW Post 4075. Participants will have the option to pick up race materials curbside at the Distillery or have them shipped for an added $5 shipping and handling fee. To ensure race materials are shipped and delivered in time for the race, participants are encouraged to register by Tuesday, June 22nd. Details for how to submit race times will be communicated following registration.”

Participants are also encouraged to take part in a virtual patriotic attire costume contest, which can be accessed at the Virtual Great Buffalo Chase 5K Facebook Event on the Buffalo Trace Distillery Facebook Page for a chance to win a prize from the Buffalo Trace Distillery Gift Shop. Additionally, participants can post pictures of their pets in Buffalo Trace or patriotic attire for a special costume contest new to this year’s race. Just be sure to tag @BuffaloTraceDistillery and use the hashtag #ChaseTheBuffalo when posting photos.

As this is virtual in nature, prizes will not be awarded to top runners this year. To honor all participants, and do a bit of good in general, Buffalo Trace Distillery will make a donation to God’s Pantry Food Bank on July 4th to support the local Franklin County community. Additionally, everyone who registers will be entered into a raffle to win a prize from the gift shop.

Registration for this virtual 5K opened May 19 and will close at noon July 2. For more information and to register visit the brand’s website here.

This week A. Smith Bowman Distillery announced that it’s adding a new Cask Strength Bourbon to its lineup. It is aged for a minimum of 10 years from barrels selected by Master Distiller Brian Prewitt. This will be an annual release.

The first release will be available later this month, bottled uncut and non-chill-filtered at 141.1 proof.

“We’re excited to add another offering in the A. Smith Bowman line of bourbons, especially a Cask Strength, which we’re sure will be really popular with our fans,” said Master Distiller Brian Prewitt. “This first release in this annual series contains barrels selected from the lower tiers in Warehouses A1 and A. We thought the flavor combinations resulted in a delicate sipping bourbon that drinks like a much lower proof. We hope you agree!” 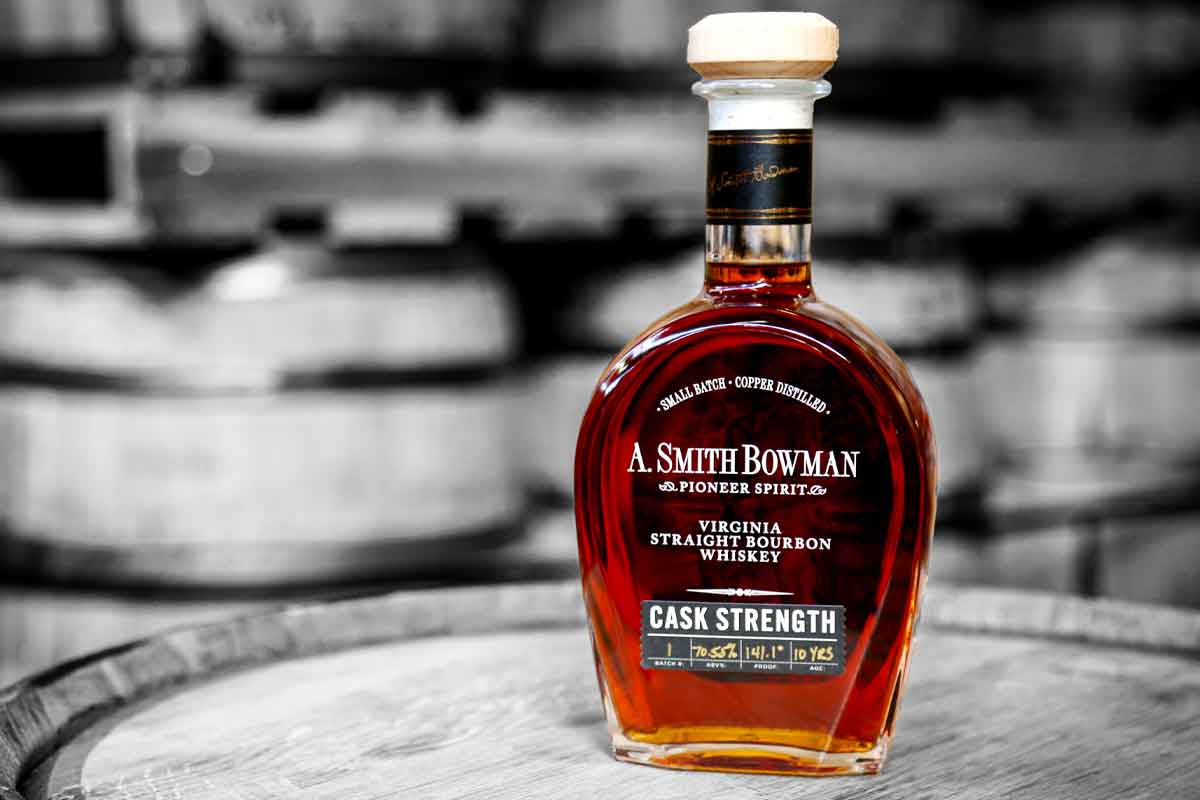 J Rieger & Co. has announced the 2021 release of its Rieger’s Monogram Whiskey. According to the press release, the 2021 expression is “a stark departure from the 2017, 2018, and 2020 expressions, drawing from a single century old cask (Bota #4) originally gifted to the distillery by Williams & Humbert, one of the oldest producers of Sherry in Jerez, Spain.” All Monogram releases have been collaborations with sherry expert Steve Olson, and are blends of the 4 Botas that have been housed in the brand’s warehouse since 2016.

J. Rieger & Co co-founder Ryan Maybee says, “the 2021 Monogram Whiskey release represents a turning point in the last 7 years of our journey to revive this beloved pre-Prohibition brand. The Monogram bottling has always meant something special to J. Rieger & Co., but this release may be far and away the most special thing we have ever done.”

The 2021 Monogram Whiskey consists of a blend of straight rye whiskeys that were previously matured for between 5 to 10 years before entering the Monogram solera in 2015. For 6 years, the straight rye was exclusively finished in the century-old, 500-liter Bota #4 sherry cask.

Rieger’s Monogram Whiskey 2021 Oloroso Bota is limited to only 539 bottles, and will be available at liquor retailers and in restaurants across the Kansas City metro area. Additionally, a small allocation is marked for New York and a few other select markets. It is bottled at 110 proof for an SRP of $139.99. 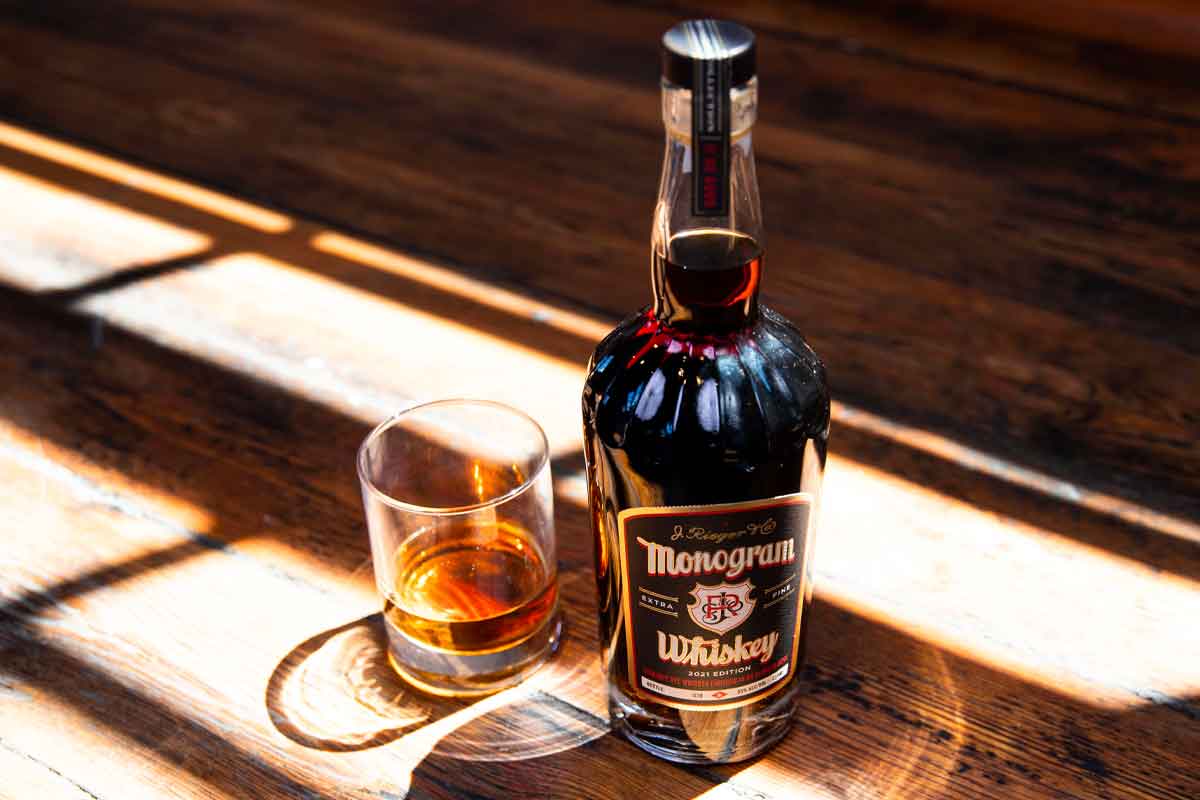 This week the historic spirits Italian spirits company Luxardo has launched its first-ever canned cocktail line. The release comes not a moment too soon — the company celebrates 200 years in business this year.

According to the press release, the canned cocktails are meant to evoke a bit of the spirit of “Cocktails Italiano.” The packaging designed by Rooster Factory depicts la dolce vita of the Italian Riviera.

“For 200 years, Luxardo’s legacy has prioritized consumers. Our family recipe has been sipped by kings, sold on the Titanic and has created an elevated experience for cocktail lovers into the 21st century,” says Matteo Luxardo, export director for Luxardo. “The canned cocktail market has been rapidly growing in the last year and it only made sense for Luxardo to introduce its classic recipes in the format that supports the modern consumers’ needs for any on-the-go occasion.”

The canned cocktails are available in three different 250 mL cans, each 10% ABV: Aperitivo Spritz, Bianco Spritz and Sour Cherry Gin & Tonic. They have an SRP of $19.99 per 4-pack. 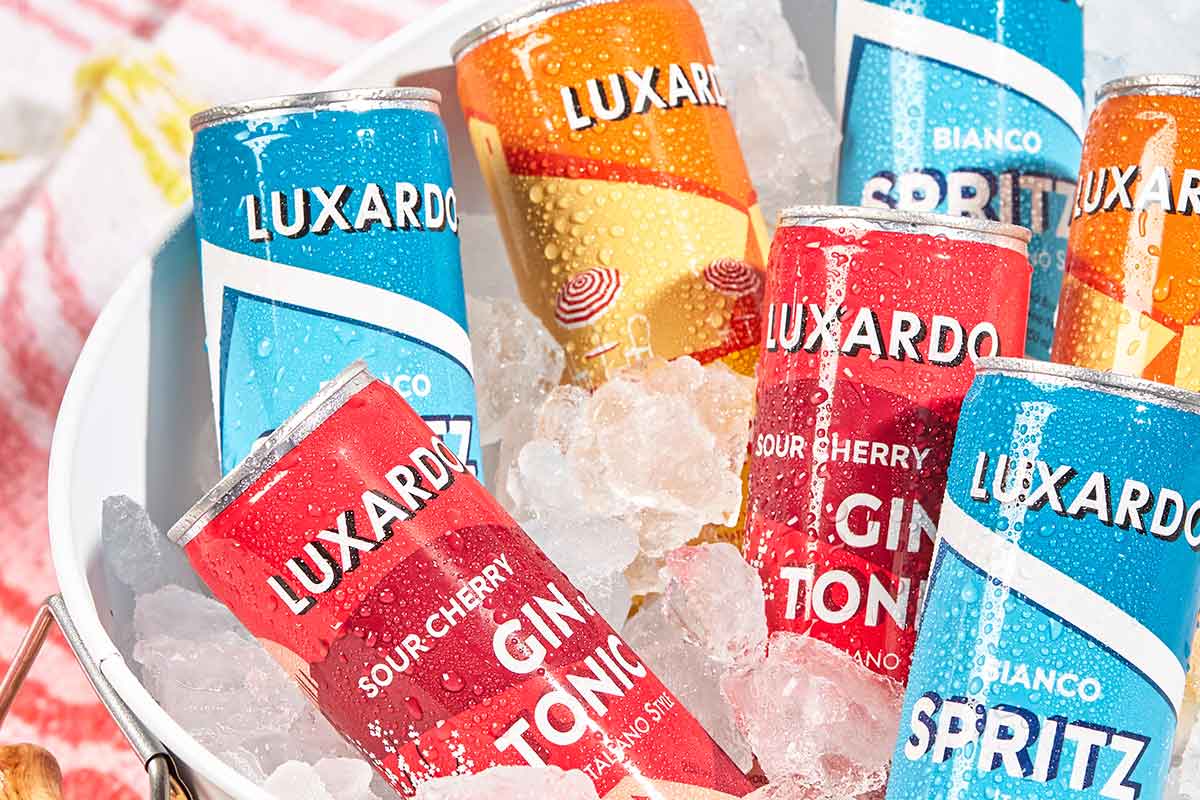 Ready to grab a bottle of Westland American Single Malt? 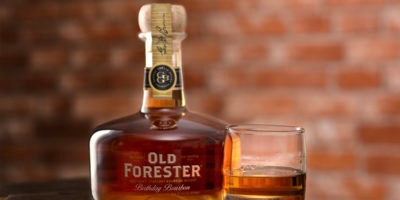 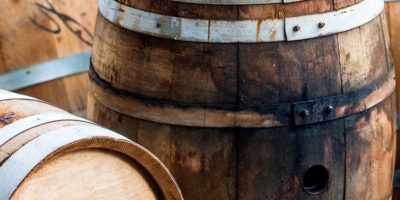 How to host a home whiskey tasting
How many bottles? What kind of glasses to use? What will you need? We've got you covered.