Whiskey Explained…Or is it Whisky?

By Stephanie Moreno
November 4, 2017
Save

Whiskey or whisky? There is much debate about how “whiskey” came to represent these spirits from Ireland and the United States, and how “whisky” became known to represent those from Scotland and the rest of the world. Some say that the Irish made the change when they exported their product to the US in the 19th Century to denote the differences from Scotch whisky. This theory, however, has been contested. The Irish, even as recently as the 1970’s, have sold bottles noting “Irish Whisky”. In the US, the TTB (Alcohol & Tobacco Tax Bureau)—a government department responsible for enforcing the laws regulating alcohol labeling and advertising—identifies the spirit as “whisky” throughout their legal documents even when discussing American-as-apple-pie bourbon. 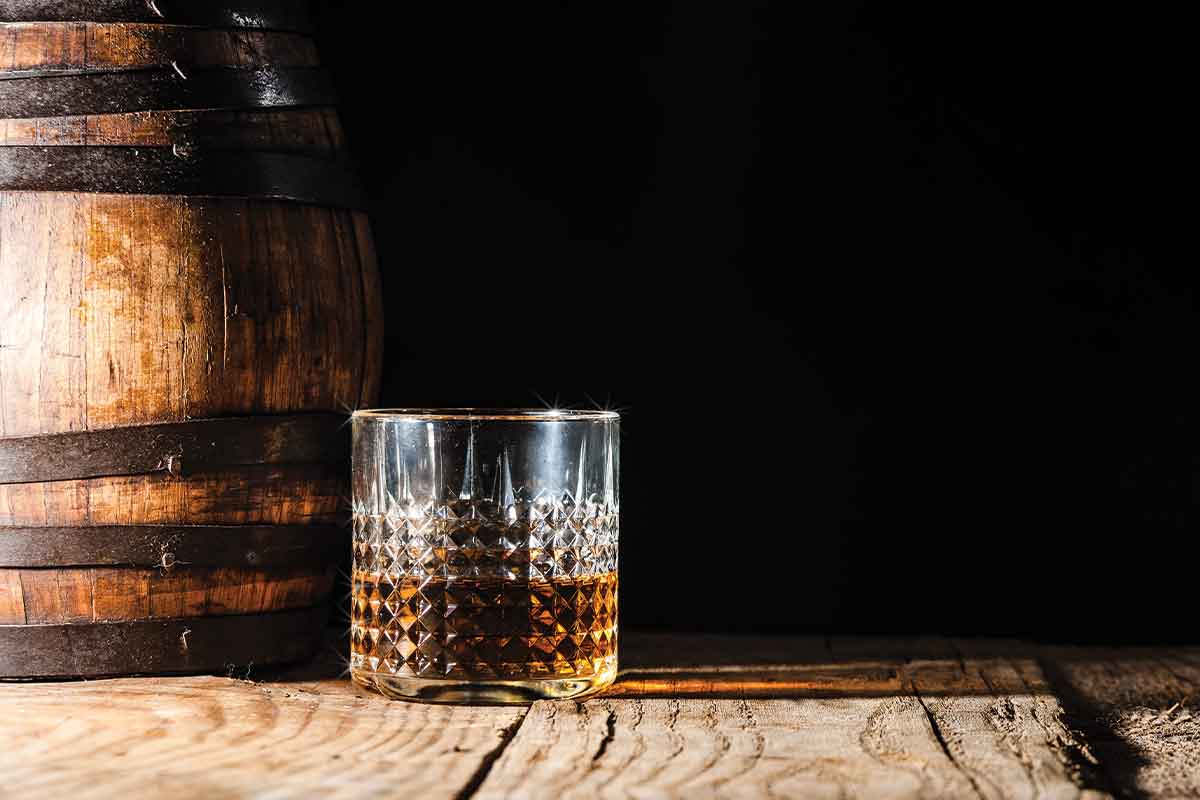 Whiskey and whisky have been used to describe the products interchangeably around the world. Flavor, flavour; color, colour; licorice, liquorice; whiskey, whisky. It really is, just a spelling difference. Or is it?

Language is in constant flux. Words take on different meaning—especially in this day and age. (Trolls used to refer to mythical, cave-dwelling creatures with an unfavorable appearance and foul smell. Now trolls are no longer mythical; they like to peruse the comment sections in online forums.) It has come to be understood that today, both Ireland and the United States, for whatever reason, overwhelmingly have labeled their products as whiskey. And Scotland, Japan, and Canada (and many more countries) label their products as whisky sans the “e”. Exceptions exist on both sides of the pond, but that is the general rule and we’re sticking to it.

Grains to Beer to Whiskey

Regardless of spelling, all whiskey is produced by first distilling beer (called a wort) and placing this clear spirit in a wooden container to age. How and why some whiskeys taste the way they do has much to do with varying the primary components (grain, yeast, barrel), and the type and shape of the still used for distillation. But by and large, the most prominent differences will be in the selection of the grains and the barrels.

The type of grains you select will have a significant difference in your end result. This is often referred to as the “mash bill”. You can use any type of grain to produce whiskey, but the most common grains used are corn, barley, rye and wheat. Certain categories of whiskey require that you use a specific type in a specific amount. For instance, in bourbon production, the minimum amount of corn used is 51%, and in Scotch single malt production, 100% malted barley must be used.

Peat is partially decomposed vegetation found in bogs. The Scots—particularly those on the Isles—often had only peat to use as a fuel source as trees and coal were scarce. Peat is lit to dry the malted barley in order to stop the grain from fully germinating. When peat burns, smoke is given off which penetrates the grain and imparts a smoky, medicinal, earthy flavor. Many Scotch distilleries use peat—but not all—and some brands are heavily-peated and some are lightly-peated. You will also see it used in some Japanese, Irish, and even some American whiskeys. 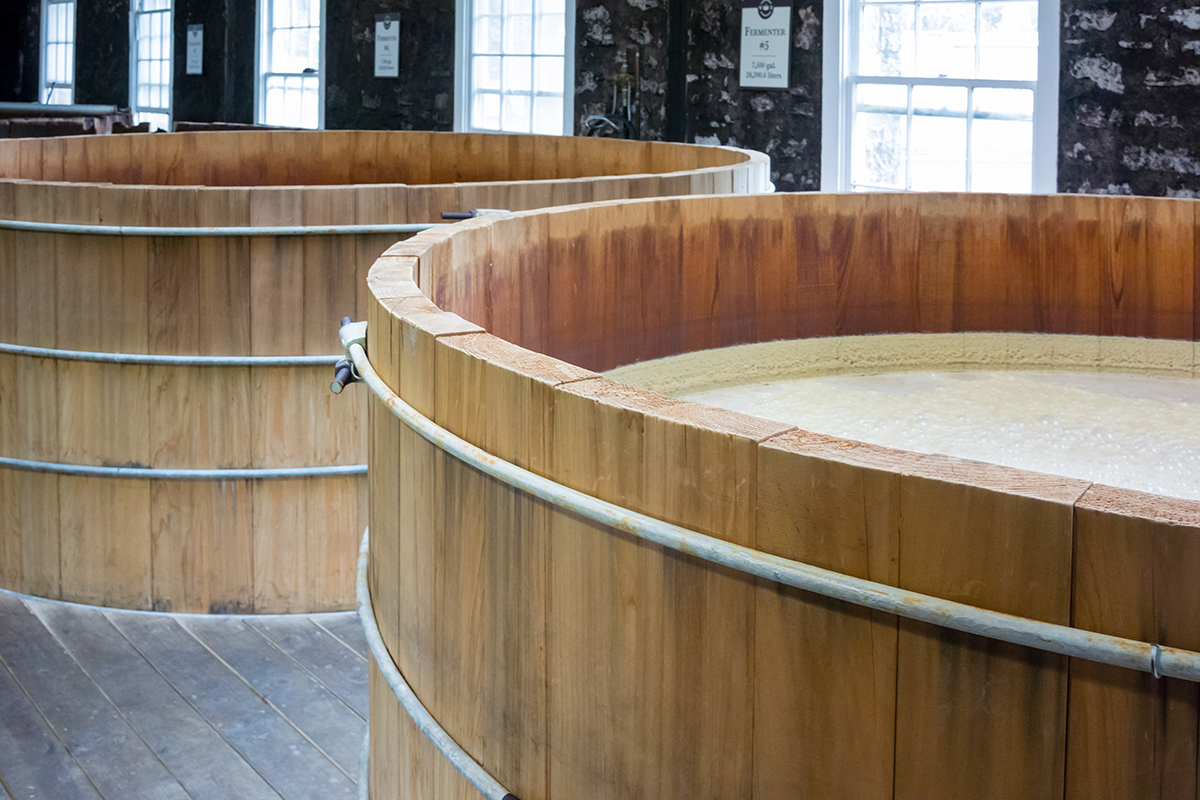 Oak is the most common type of barrel to be used because of its unique ability to be both durable and pliable while also being water-tight. American white oak and European oak are the most commonly used. American oak—which is usually heavily-charred—will provide vanilla, caramel and coconut notes, while European—which is lightly-toasted—will be milder, spicy, and since they will almost always have had sherry in them, will bring fruit and nut flavors to the whiskey.

Is the barrel unused (virgin) or has it been used before (refill)? If it has been used before, what was it used for? The most commonly used barrels are ex-bourbon and ex-sherry (which is a type of fortified wine). The Scots also often reuse the barrels two, three, or sometimes more to age their whisky. They are referred to as first-fill, second-fill, etc. or rejuvenated (essentially scraped and re-charred). Whiskeys can be aged entirely in the barrel they begin in, or they can be finished (spend some time in another type of barrel before bottling) in a different type. The most common finished barrels used are ex-wine casks like sherry or port, but you will see more exotic types such as former rum, cognac, dessert wine, and even white wine barrels.

How large the barrel is will change the liquid-to-wood ratio, which will change the maturation rate. The smaller the barrel, the more contact the liquid has with the wood. Often craft distilleries will use small (5, 10, 25 gallon) barrels to aid in speeding up the maturation process. Standard bourbon barrels for example are 53 gallons/200 L. Standard sherry casks (also called butts) are 158 gallons/600 L.

The temperature and humidity of the location of the barrels will affect the flavor of the whiskey. Whiskey aged in Scotland, where the climate is cooler and moderate, will age slower than one aged in a climate which is very hot in the summer and very cold in the winter, like Kentucky. 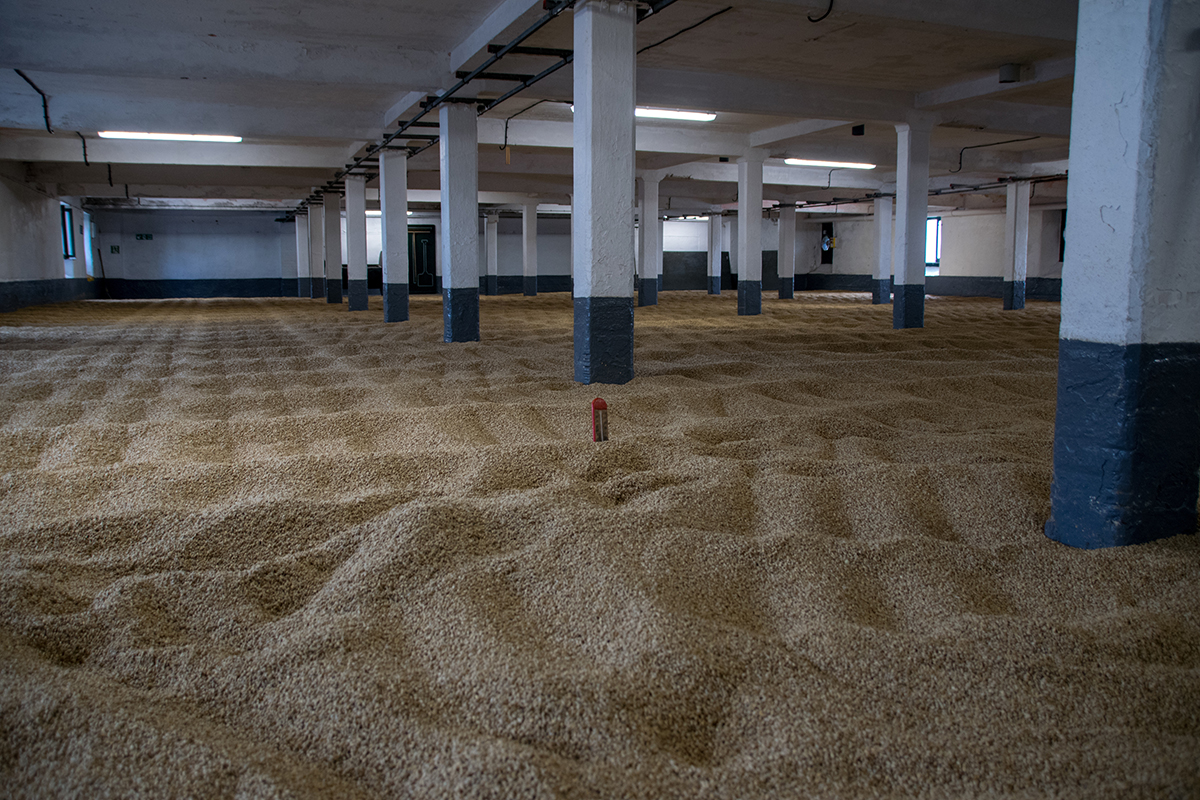 – Where: USA only
– Mash Bill: Must use at least 51% corn, other grains typically used are rye or wheat and barley
– Distillation Method: No legal requirement for types of still used, but typically column-stills and either a doubler or thumper is used. Pot stills are utilized by some producers.
– Aging Requirements: No minimum amount of time for aging, but straight whiskeys are aged a minimum of 2 years. If aged under 4 years, age must be stated on label.
– Type of Barrels Used: Must use new, charred barrels

– Where: Tennessee
– Mash Bill: Must use over 50% corn, other grains typically used are rye and barley.
– Distillation Method: Same as bourbon with the additional step after distillation. Before placed in barrels, the new make whiskey undergoes the Lincoln County Process which means it is filtered through maple charcoal.
– Aging Requirements: No minimum amount of time for aging, but straight whiskeys are aged a minimum of 2 years. If aged under 4 years, age must be stated on label.
– Type of Barrels Used: Must use new, charred barrels 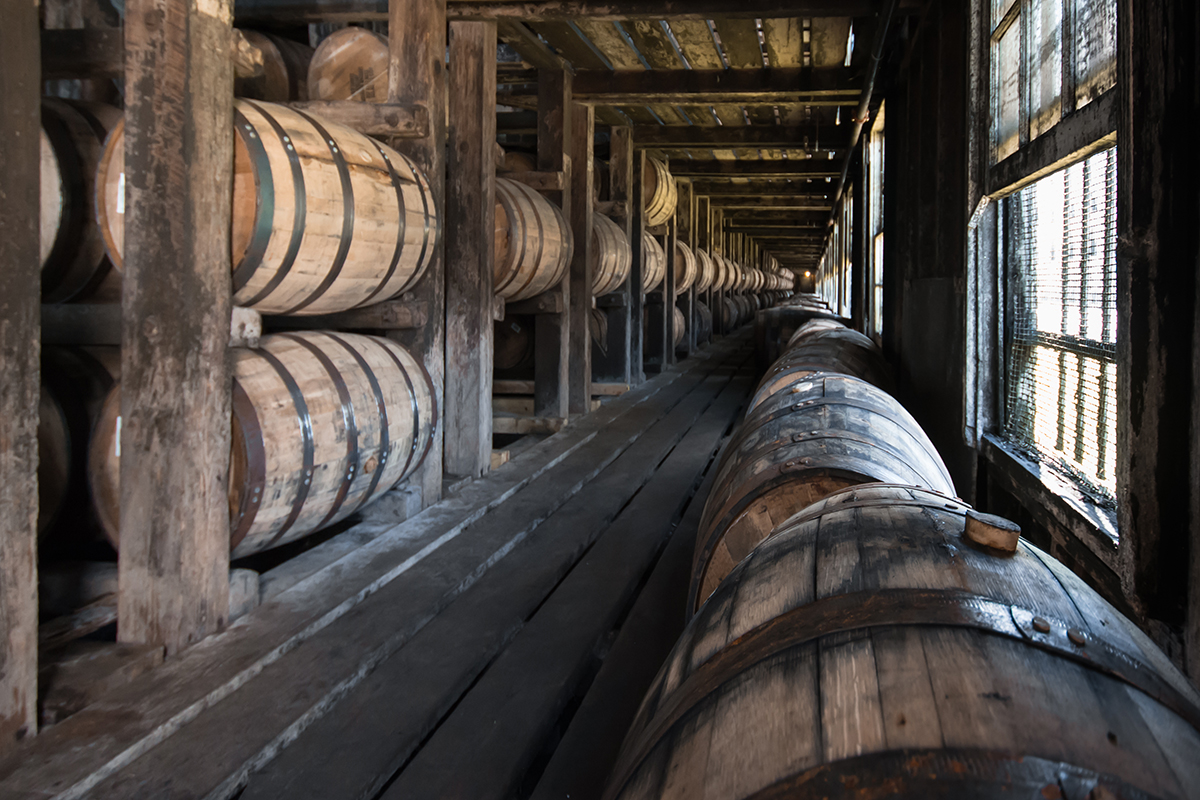 – Where: Mostly Scotland and Ireland, but made around the world
– Mash Bill: 100% malted barley
– Distillation Method: Distilled in pot stills and produced at one location.
– Aging Requirements: For Scotch and Irish Single Malt, must be aged a minimum of 3 years.
– Type of Barrels Used: Typically used barrels, but new oak may be used as well as wine barrels for finishing.

– Where: USA only
– Mash Bill: A minimum of 51% malted barley with the remaining grains, typically rye or wheat.
– Distillation Method: No specific type of still is required, but typically pot stills are utilized.
– Aging Requirements: No minimum age requirement
– Type of Barrels Used: Must use new, charred barrels

– Where: Made around the world, but for these discussions, we’ll focus on Scotland and Ireland.
– Mash Bill: A mix of one or more single malt(s) and one or more grain whiskies
– Distillation Method: Pot stills are used for the malt whiskies and column-stills are used for the grain whiskies
– Aging Requirements: For Scotch and Irish, must be aged a minimum of 3 years
– Type of Barrels Used: Typically used barrels, but new oak can be used. 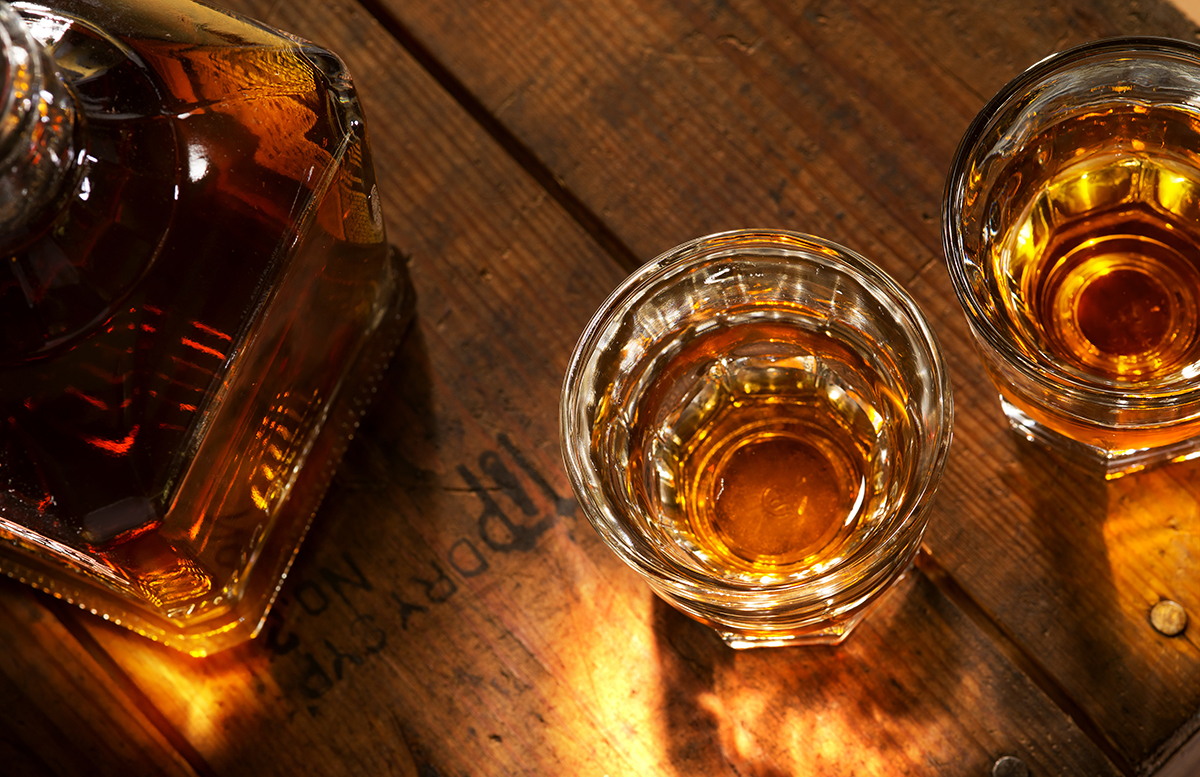 – Where: Mostly the USA, but can be made elsewhere, most notably Canada.
– Mash Bill: If American, a minimum of 51% rye with the remaining grains typically corn and barley.
– Distillation Method: Typically a mix of column-stills and doublers or thumpers, but pot stills may be used.
– Aging Requirements: If American, no minimum age requirement. Canadian whiskies must be aged a minimum of 3 years.
– Type of Barrels Used: If American, must be aged in new, charred oak barrels.

– Where: Ireland
– Mash Bill: A blend of unmalted and malted barley
– Distillation Method: Distilled in pot stills at one distillery.
– Aging Requirements: Aged a minimum of 3 years.
– Type of Barrels Used: Typically used barrels are used, but new oak can be used as well as wine barrels for finishing.

As you can see, producers can achieve great flavor differences by their choices of these few ingredients. That is what makes whiskey such a fascinating (and delicious) category to explore. 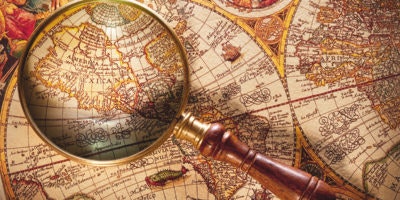 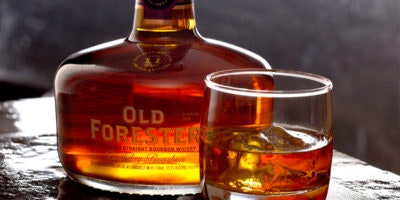 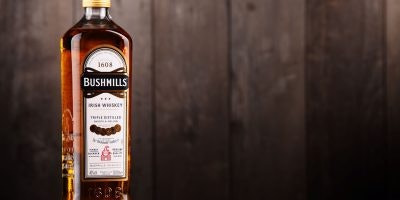