The first week of April has showered us with new releases from whiskey producers all over the world. For starters, Glenmorangie has a new single malt which features wine casks from the Côte Rôtie—a first for the distillery. Staying in Scotland, there’s a new blended malt from the Edrington Group which includes single malts from Highland Park and The Macallan, among others.

Traveling across the pond on to Kentucky, Buffalo Trace has a trio of Vintage Bourbons with a name that pays homage to the distillery’s own history. Finally, the independent bottler, Barrell Craft Spirits, has a take on the infinity bottle—this one uses whiskeys from all over the world all in one blend. Find the details to these bottles and more in the booze news for the week of April 2, 2018!

This release was created by Glenmorangie’s director of whisky creation, distilling and whisky stocks, Dr. Bill Lumsden, and is the second release in the Bond House No. 1 Vintage Collection. This marks the first time the distillery has used wine barrels from the Côte Rôtie—an AOC in the Northern Rhône wine region. This French wine region is notable for allowing up to 20% viognier grapes (white grapes) to be fermented along with syrah grapes (red grapes). Other casks used in its creation include whisky which aged in former oloroso sherry and bourbon barrels.

“The Bond House No. 1 Vintage collection invites single malt whisky collectors to explore some of Glenmorangie’s most rare and prized vintage whiskies, marked for greatness from their year of origin,” says Lumsden. “After 27 years of maturation, I knew that Glenmorangie Grand Vintage Malt 1989 was ready to share. Each cask in the assemblage was carefully chosen to complement the depths brought upon by the ex-Côte-Rôtie casks. Connoisseurs will delight in the beautiful balance of subtle finesse, richness, and intensity of the expression, which is extraordinarily varied for a whisky of such age.” 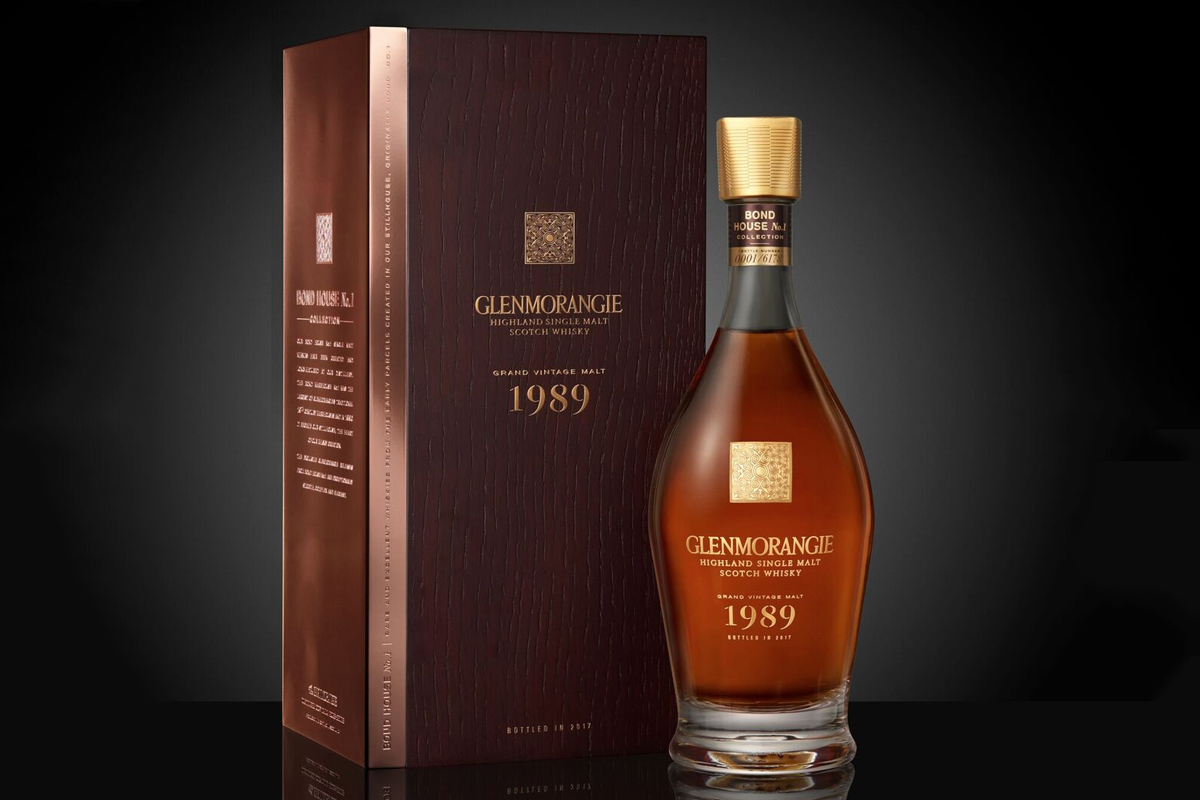 Naked Grouse Blended Malt first started to roll out in August 2017 in select global markets, and is expected to appear in select US markets beginning April 2018. This is a blended malt whisky featuring single malts from Glenturret, Glenrothes, Highland Park and The Macallan. These were aged in first and second-fill American and European oak before blending together. The blend then finished in first-fill oloroso sherry butts for six months further. It is chill-filtered and bottled at 43% ABV.

Chris Vogt, US Brand Manager, says, “The launch of a blended malt was in response to increasing popularity of single malts and demand from bartenders and consumers for an accessible full-flavored premium whisky. With a blended malt, we can use the individuality and character of single malts to create a flavorful whisky which stands out from the crowd and at a price point perfect for simple cocktails. We also wanted to create a disruptive brand which that challenges the traditional stereotypes of Scotch whisky and appeal to a consumer entering the category.”

This replaces the Naked Grouse Blended Whisky which contained grain whiskies and has been removed from the market.
Suggested retail price $34.99 with availability in Colorado, Minnesota and Pennsylvania. 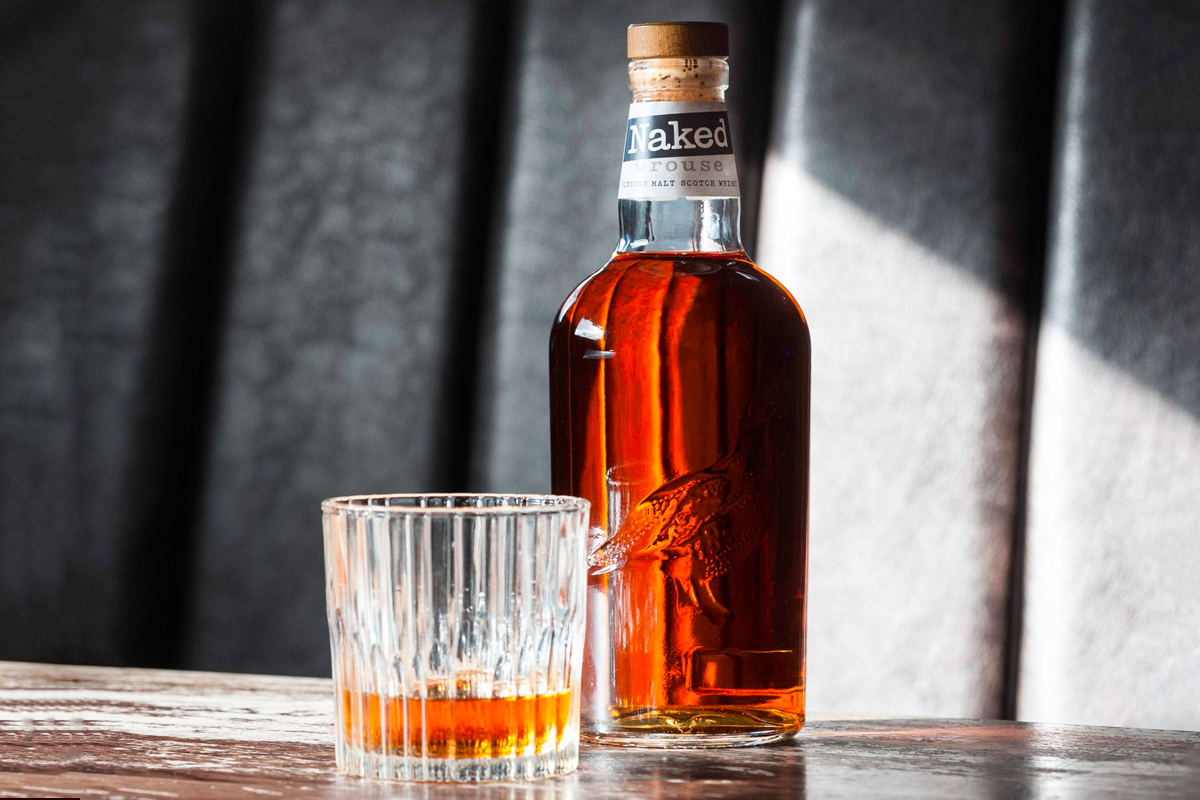 Available as of spring 2018, Buffalo Trace has released this trio of extremely rare O.F.C. Vintage Bourbon whiskeys. Only one barrel for each vintage was filled with few bottles for each release. Their availability is as follows:

Named after the O.F.C. Distillery, a National Historic Landmark known today as Buffalo Trace Distillery, this is actually the second batch of O.F.C. bourbons released, but the first one available for sale. The first batch was released to non-profit organizations at no charge raising nearly $1.2 million at auction for a variety of causes.

Each bourbon is packaged in a crystal bottle with real copper lettering inlaid. Additionally, a hand-applied paper label notes the milestones for the vintage year of the bottle. The bottle is sold in a wooden display box. 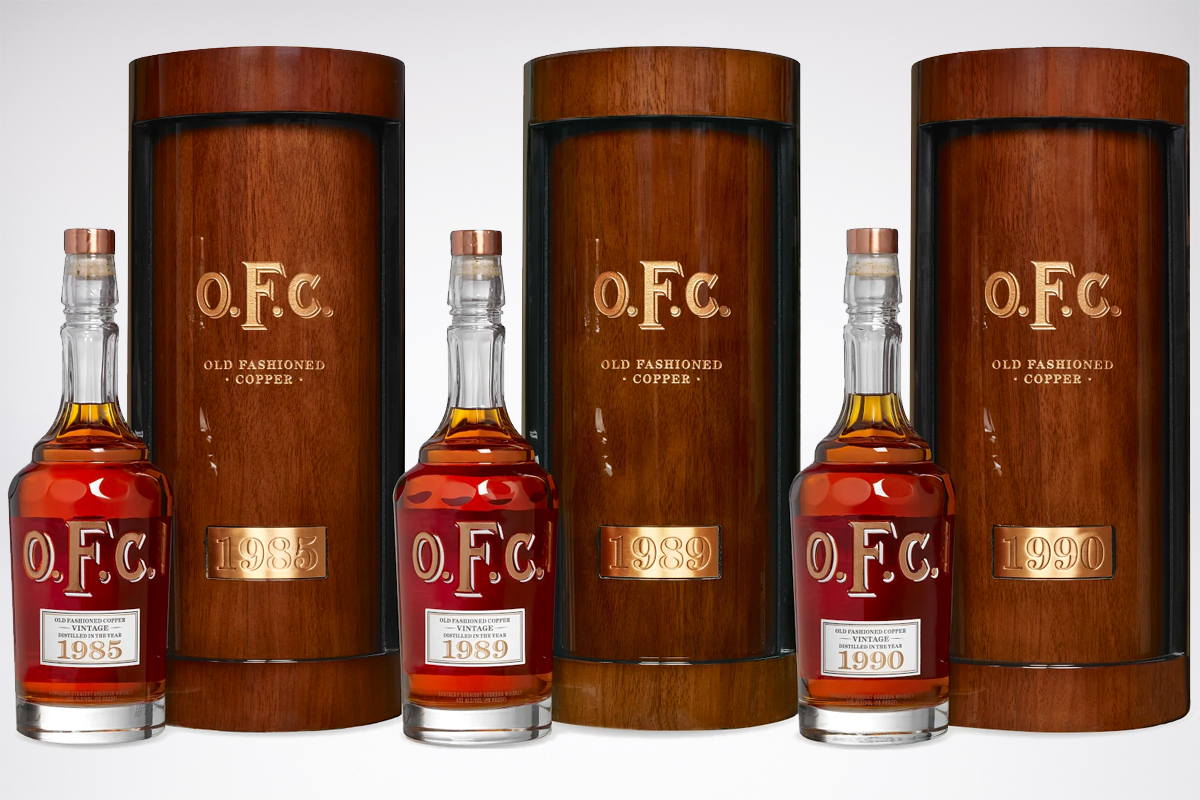 This whiskey project is a take on the infinity bottle that some whiskey enthusiasts create by pouring the last ounce or two of whiskey—as they finish a bottle—into a separate bottle to create a unique blend. Barrell has done that with this whiskey which, for this batch, contains: Tennessee whiskey & rye; Indiana whiskey finished in oloroso sherry butts; Indiana rye; 100% Polish malted rye finished in curaçao barrels; Scotch whisky; and Irish whiskey.

Each release will be different as new whiskeys will be added to the batch as needed. The bottling date will mark the new batch. Bottled at cask strength of 59.65% ABV. 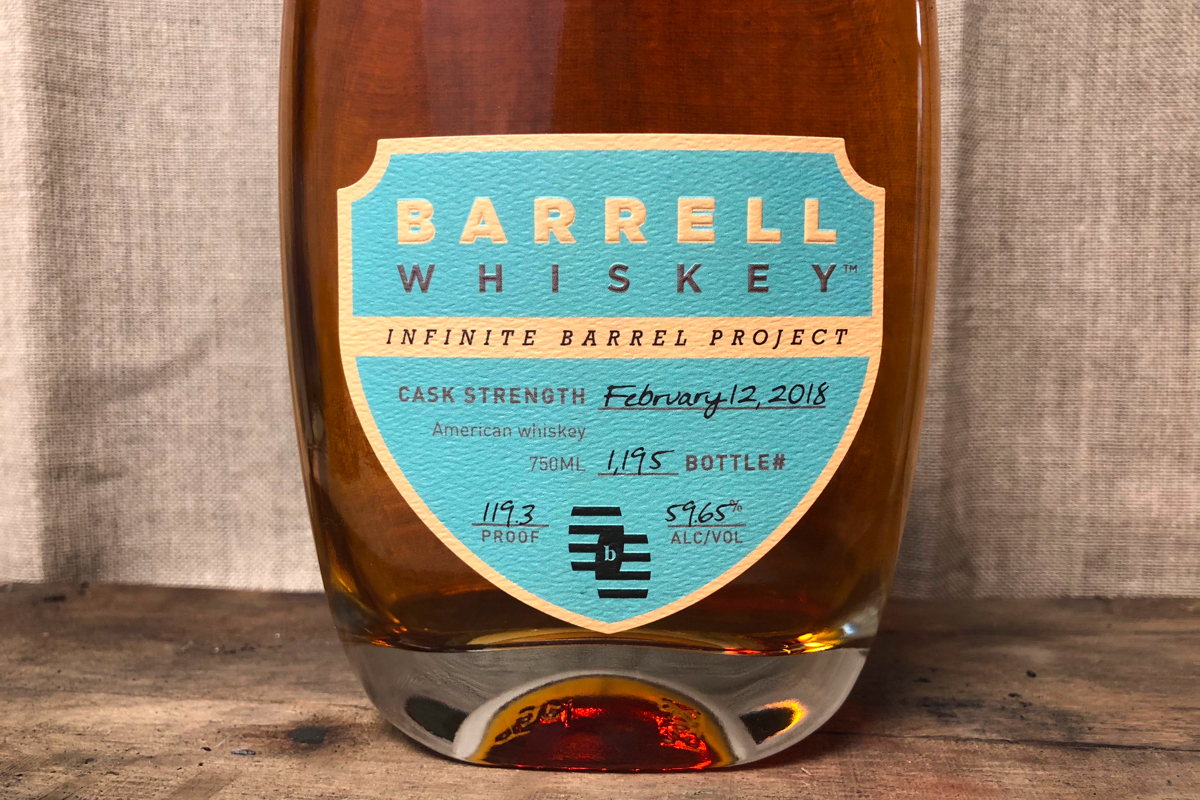 This batch was released at the end of March 2018 and consists of straight bourbons distilled and aged in Tennessee and Kentucky. The ages used include 9.5, 10, and 11 year-old bourbons. Bottled at a cask strength of 107.6 proof. 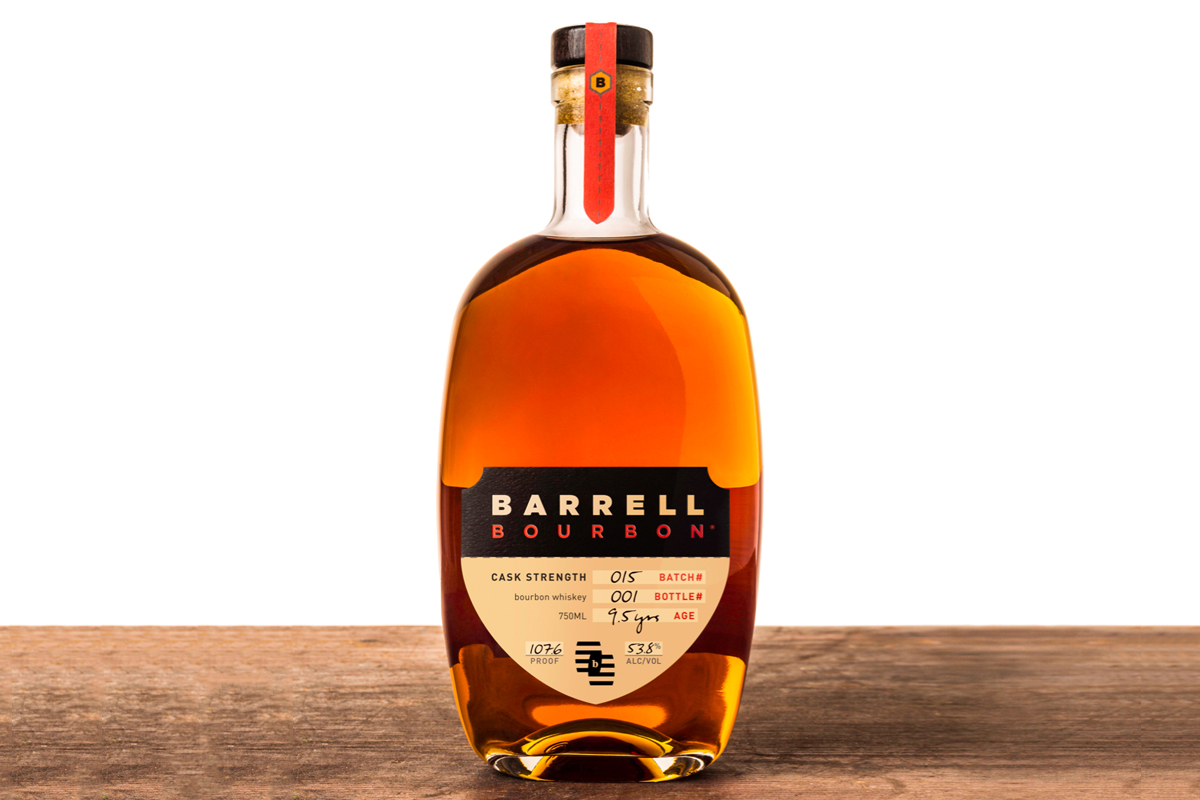 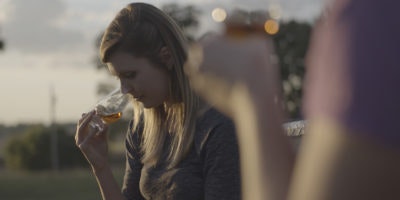 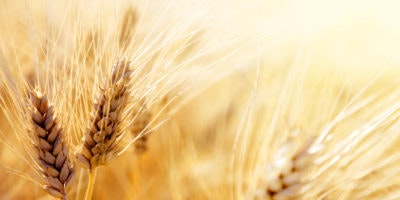 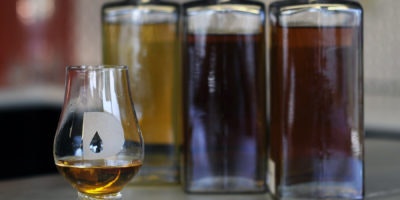