Now that April is upon us we’ve officially reached the next level of 2021. Spring season is in full effect — baseball is back, the flowers are blooming, and the new spirit releases keep coming to market. For those whiskey fans wanting to be in the know for quality new brands, check out Stellum Bourbon and Stellum Rye. These new whiskey bottlings are the first releases from Barrell Craft Spirits’ new whiskey brand and they’re moderately priced.

Also new to the market are single barrel rye whiskeys from Castle & Key. These whiskeys are a bit more limited in number, but no less exciting to see. Of course we can’t forget to mention the latest spring edition of Old Fitzgerald Bottled in Bond Bourbon. This time Heaven Hill has released an 8-year-old bottling for its bi-annual decanter series.

However, if the warmer weather has you seeking something lighter than whiskey, you’ll be keen to see new releases of tequila, mezcal, and even sotol this week. And as we dream of the summer days ahead, we can look forward to the two new watermelon-flavored spirits from two well-known brands, Absolut and Malibu. Read on to get the details on these releases and more in Distiller’s Roundup for April 2, 2021!

This week, independent bottler and blender Barrell Craft Spirits launched a new brand called Stellum Spirits in celebration of the “modern-day whiskey drinker,” according to the release. The brand is launching with three releases, a blue labeled bourbon, a green labeled rye, and single barrels of each, all bottled at cask strength.

The blue-labeled Stellum Bourbon is a blend of straight bourbons distilled and aged in Indiana, Kentucky and Tennessee. The heart of the blend is made from three Indiana mash bill recipes. Two of them are high-rye and the other almost entirely of corn. The Kentucky and Tennessee bourbons are older barrels blended in. It’s bottled in Kentucky at cask strength of 114.98.

“We wanted to create a brand that brings American whiskey into the modern age with simple elegant blends and single barrels selected with care and intention,” said Founder Joe Beatrice. “Our whiskeys are created through a rigorous process of study, observation, and experimentation. We are driven by progress, polish and — above all — attention to detail. We will always think critically about how to make our whiskey better.”

Available at select US retailers as of late March 2021, both Stellum Bourbon and Stellum Rye have an SRP of $54.99. 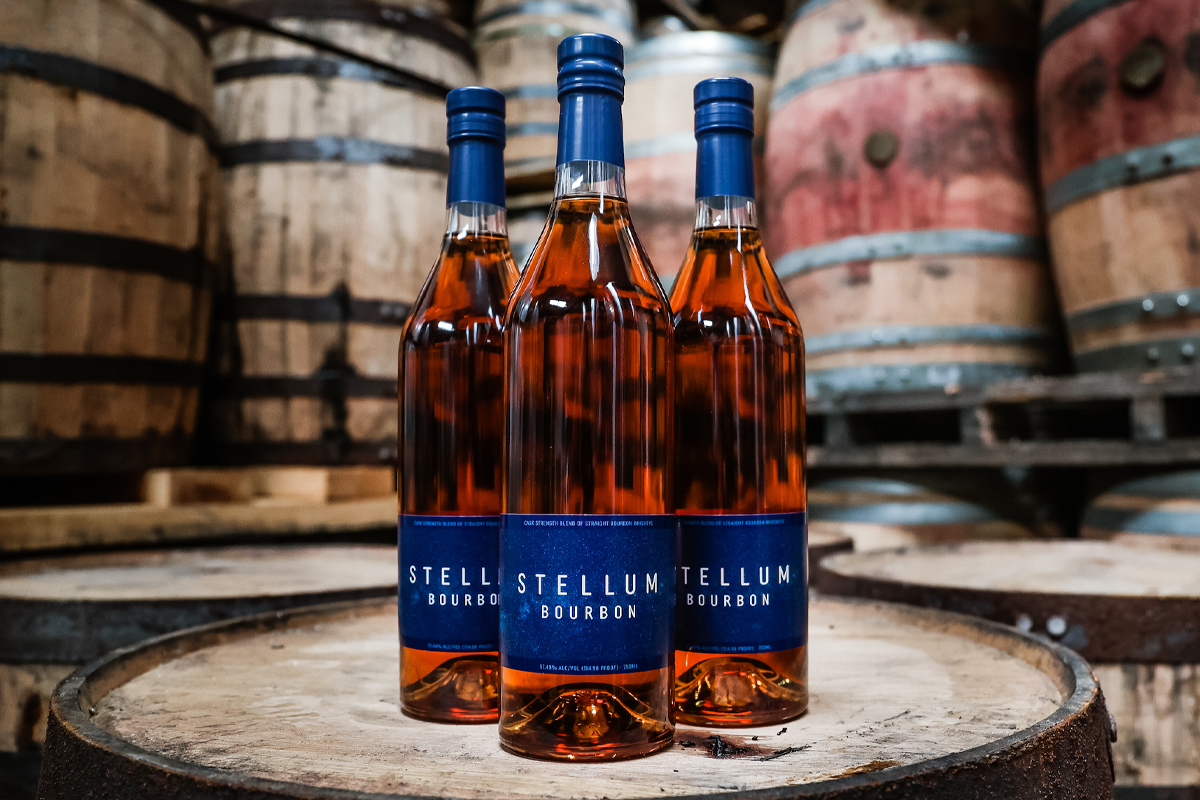 This month, Castle & Key announced the release of Slow Hands Single Barrel Rye Whiskey. This marks just the second whiskey release in the brand’s history and its first single barrel release since its founding in 2014. The Kentucky brand released four single barrel rye whiskeys for its first batch: casks 237, 281, 334 and 396. They are each made with a mash bill of 63% rye, 17% yellow corn and 20% malted barley. Incidentally, there were just 200 bottles produced for each cask. Furthermore, they are each bottled at cask strength and will be available at the distillery for $59.99 each.

“With our Slow Hands series our focus is to bring forth the anomaly, the unusual, and the interesting, to showcase the dynamic nature of maturation,” says Brett Connors, brand ambassador and blender. “With four unique barrels, we are confident whiskey drinkers will find the right one that fits their preferences.” 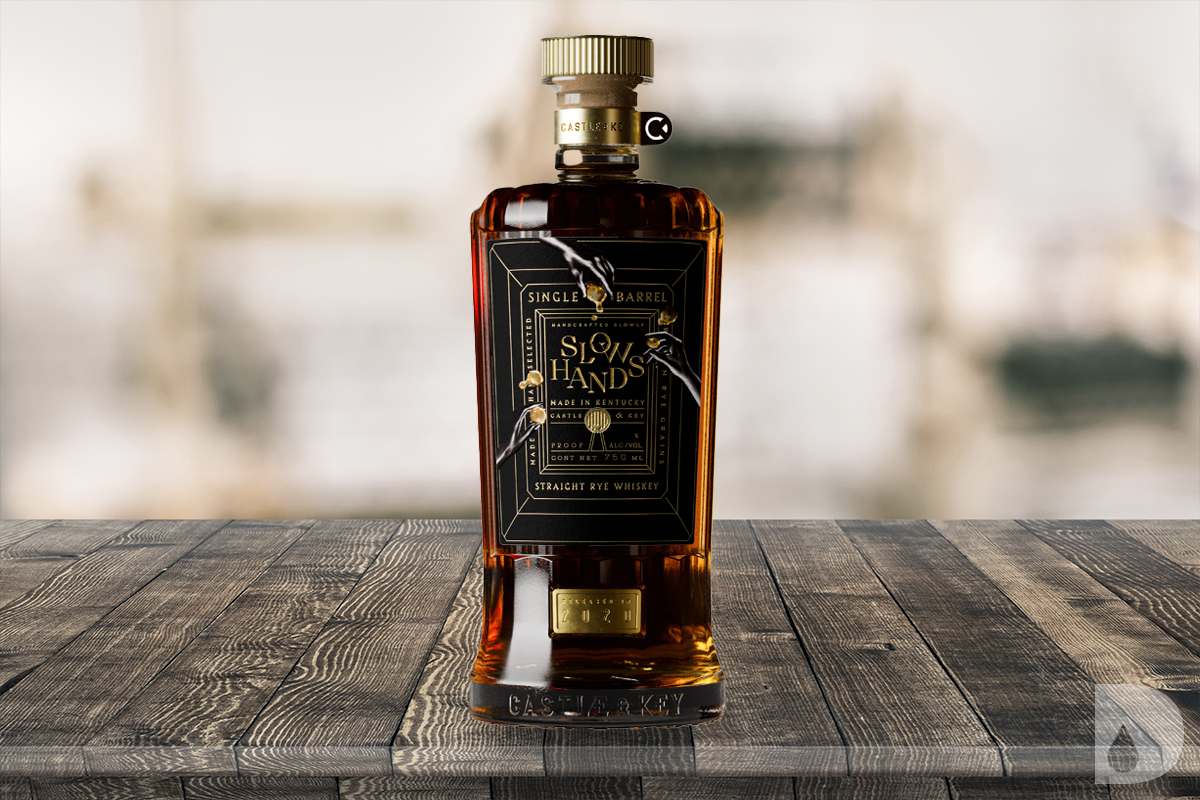 This week Heaven Hill announced the spring 2021 release of its Old Fitzgerald Bottled-in-Bond decanter series. It is the seventh release in the series which first began with a spring 2018 release. Old Fitzgerald is a wheated bourbon produced by Heaven Hill and this bottled in bond version was distilled in one distillation season (spring 2013). The bourbons were pulled from three different rickhouses on different floors and from two different production dates.

Aged for 8 years before bottling in spring 2021, this release bears a green label as other spring releases have done. It is bottled at 100 proof and has an SRP of $85. 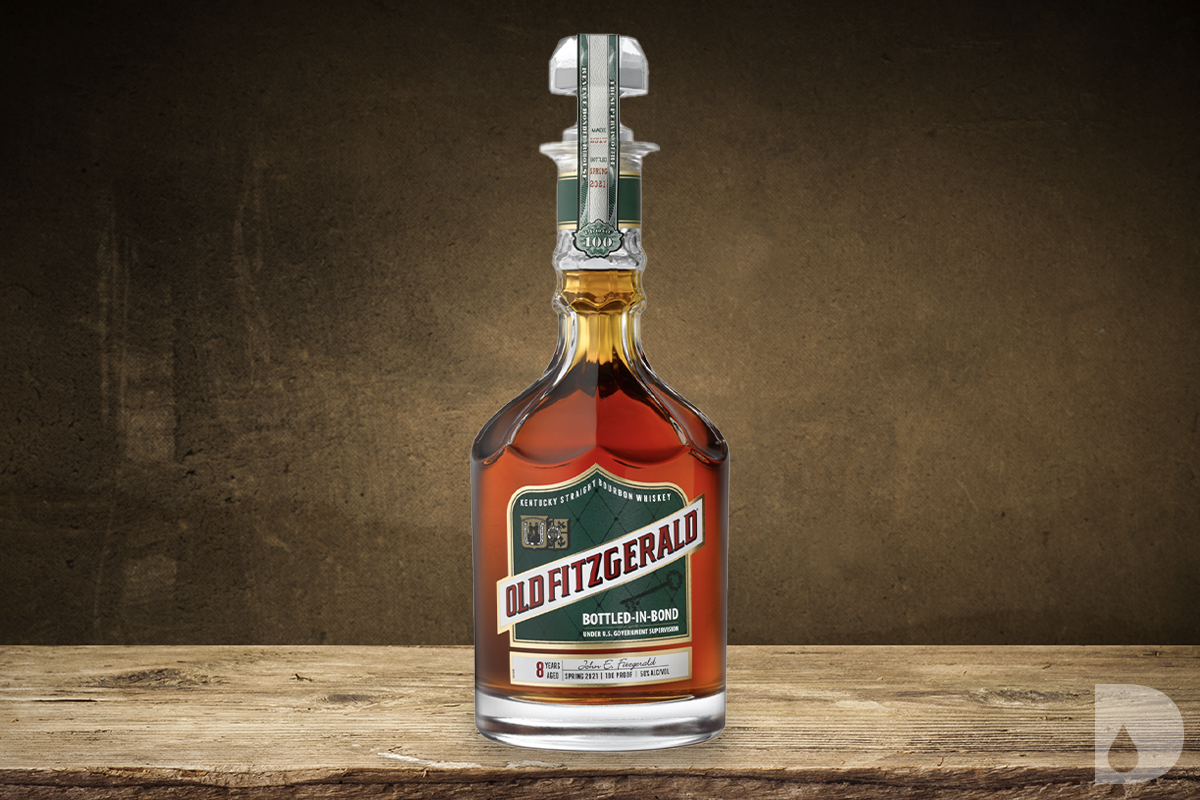 Bushmills Cask is the first release in Stranahan’s Distiller’s Exclusive series. This American single malt begins with 100% malted barley which is distilled and aged for four years in new American oak casks with a level char #3. Then the whiskey is transferred to former Bushmills single malt Irish whiskey barrels for 3 more years to finish its maturation. This bottling is available for $69.99 at Stranahan’s distillery in Denver exclusively as of March 31, 2021. 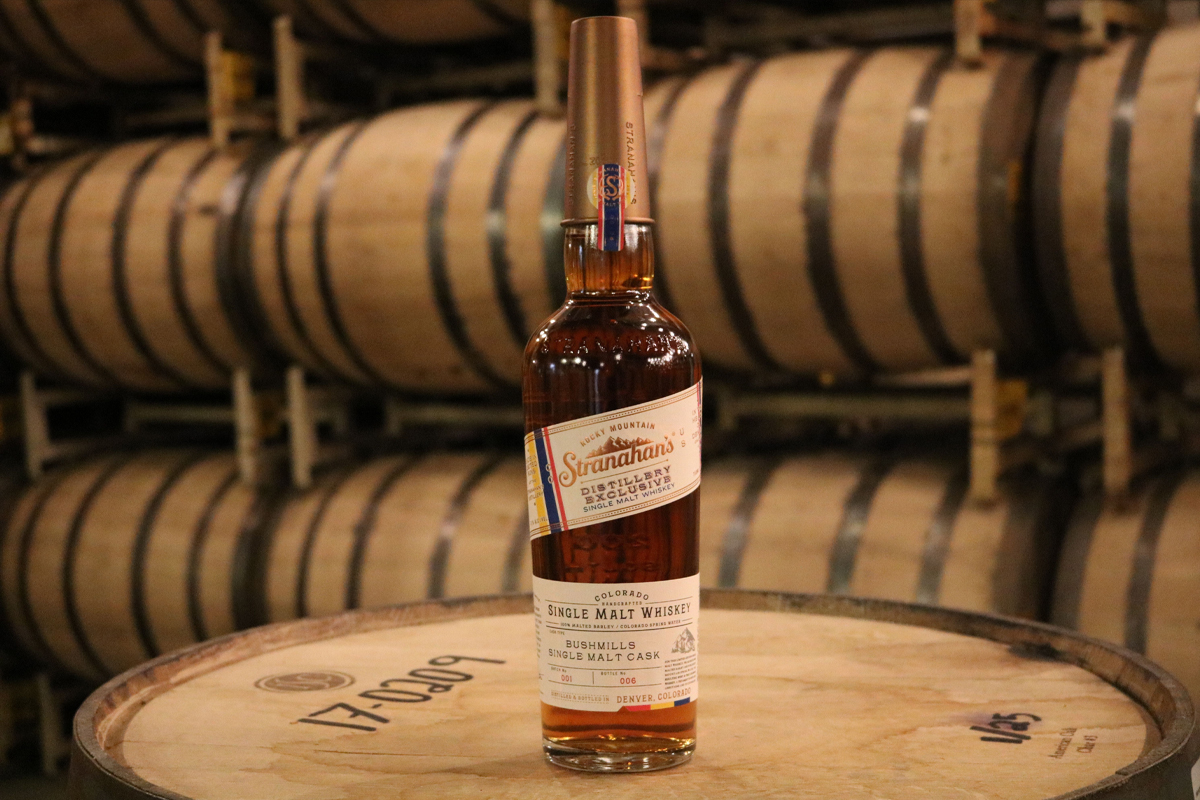 This week, Sombra Mezcal launched a new reposado mezcal to its portfolio. Sombra Reposé is a reposado mezcal made with espadín agave at the brand’s own palenque in Santiago Matatlán, Oaxaca. The mezcal is rested for up to six months in Limousin oak Bordeaux red wine barrels from Château Léoville Poyferré, a second-growth wine estate in St. Julien.

“We are very excited for our latest expression, Sombra Reposé which uses our award-winning mezcal made from espadín agave,” said Martha Cardoso, Sombra’s general manager and director of the Sombra Adobe Brick Project. “It is fair trade and responsibly-sourced, and aged in French barrels that formerly held prestigious wine. This process produces a refined spirit with a beautiful rose-colored hue, hence the name Reposé (French for rested, similar to the Spanish reposado).” 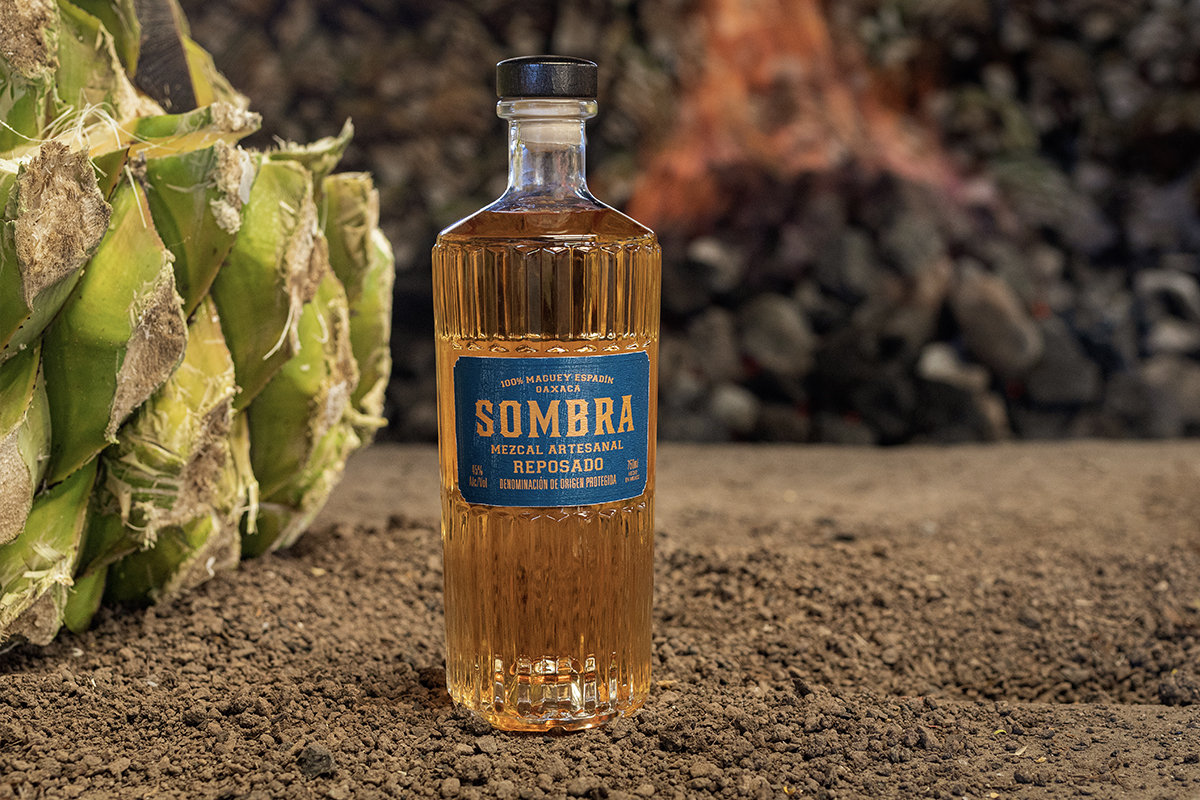 Los Magos Sotol Launches in the US

Los Magos Sotol is made from 100% organic sotol. The brand was founded by native Chihuahuans Eduardo Almaza and Juan Pablo Carvajal who partnered with the Jaquez Family Distillery to develop the recipe. The hearts of the plant are roasted in an underground wood-fired pit for 36-48 hours, then milled and fermented in an open vat. Lastly it’s triple-distilled and bottled at 76 proof. Los Magos translates to “the magicians.”

“We set out on a mission to explore the natural beauty of the desert and to find the original Sotol makers in the region, paying homage to this centuries old spirit,” says Co-Founder and Chief Production Officer Juan Pablo Caravjal. “Sotol is more than just a beverage but a journey of flavors making its way from the fruitful deserts of Mexico to any and everyone who wishes to try this spirit, allowing them to enjoy an artisanal, high quality cocktail.”

The blanco expression is available in the US as of March 2021 with an SRP of $55. 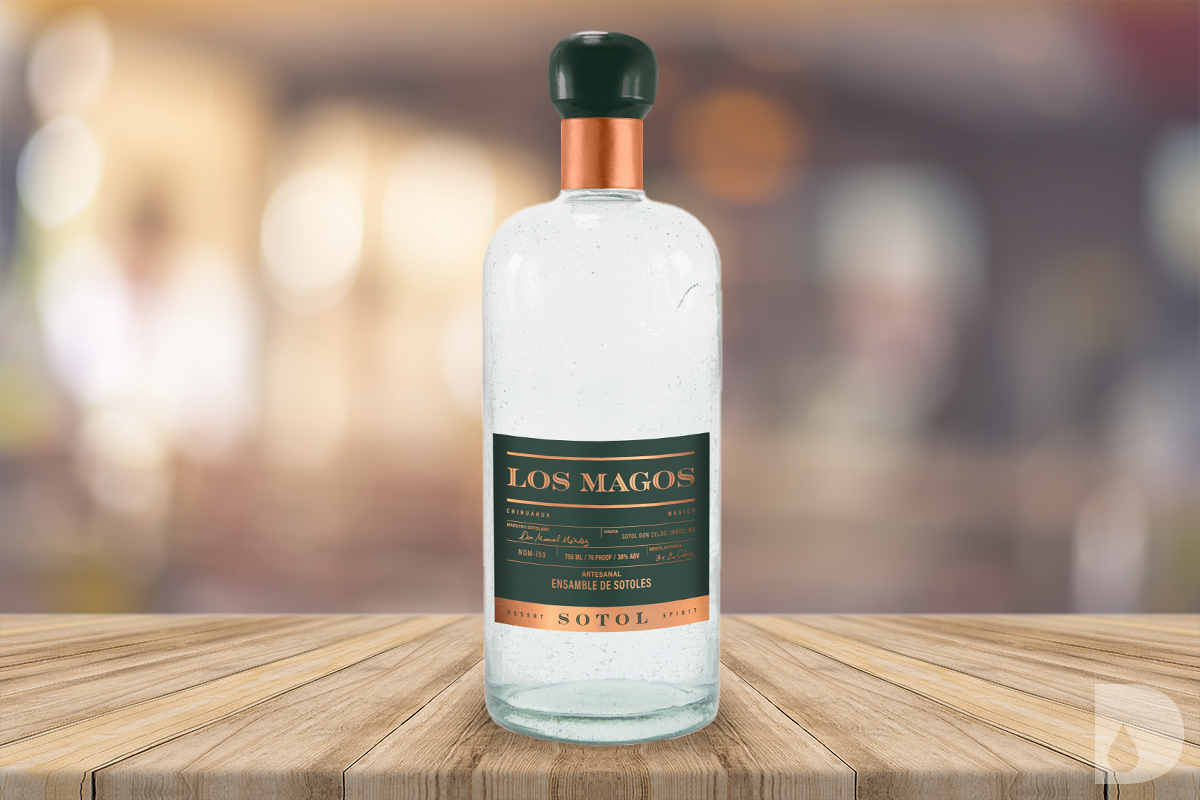 This five grain whiskey is a limited-edition bottling made in partnership with Voyageurs Conservancy, an official non-profit partner of Minnesota’s Voyageurs National Park. The five grains used here are rye, wheat, oat, corn and barley. The whiskey is aged for almost three years in charred Minnesota white oak and is bottled at 45% ABV. Only 120 cases were produced. Notably, proceeds from the whiskey will benefit the non-profit’s work to protect the park’s lands, waters and dark skies.

The whiskey is available now at select retailers in Minnesota with an SRP of $50. Additionally, 375ml sized bottles are available at Tattersall’s northeast Minneapolis cocktail room for $30 a piece. 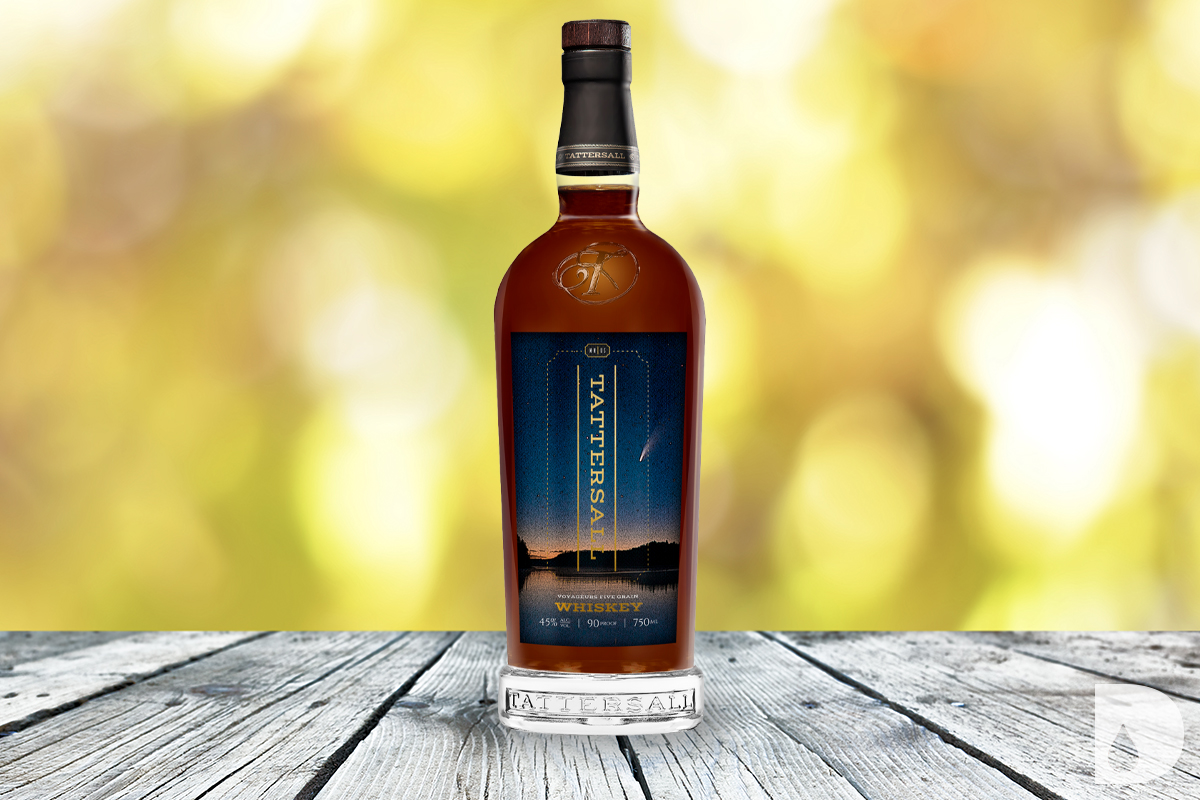 If you like keeping up with the latest trends, you’ll be keen to see that both Absolut Vodka and Malibu Rum have announced watermelon-flavored bottlings for each brand. Absolut Watermelon is made with no added sugar and is bottled at 76 proof. Meanwhile, Malibu Watermelon is bottled at 42 proof. Both watermelon flavored spirits have an SRP of $19.99 each for 750ml sized bottles.

Santo Spirits is an agave spirits brand founded by rock musician Sammy Hagar and chef/restaurateur Guy Fieri. Their reposado tequila was announced this week and it joins a blanco and a blue weber and espadin agave blend called Mezquila in its portfolio. The reposado tequila is made with 100% blue weber agave from the Highlands of Jalisco at El Viejito Distillery. After steaming the agaves in stone ovens, the agave is crushed, fermented and then double distilled in copper pot stills. It’s bottled at 40% ABV after aging for 5 months in ex-bourbon barrels. It has an SRP of $40 and is available now in the US and Canada. 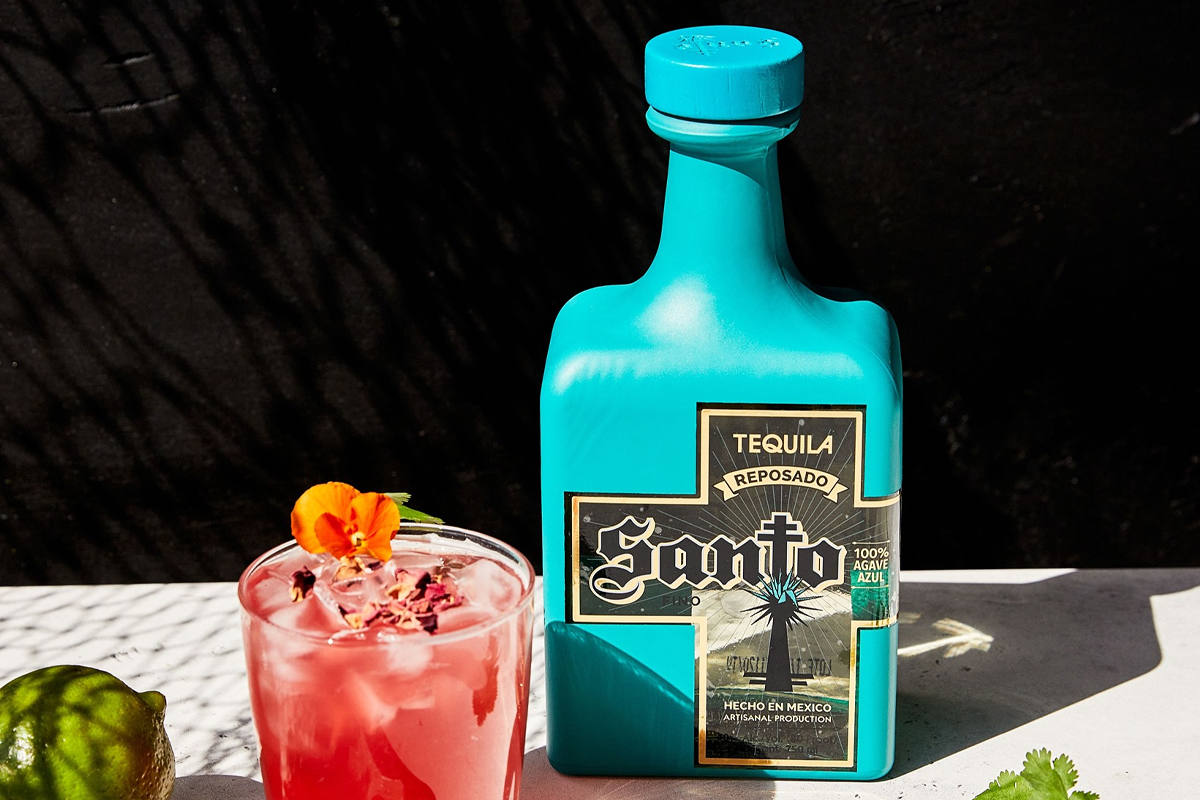 This week, Jägermeister announced the release of Cold Brew Coffee Mini Meisters. This pack consists of ten single-serve shot-sized (20ml) bottles, sold in a 10-shots to-go pack. Jägermeister Cold Brew Coffee was first launched in 2020 and is made with Jägermeister’s collection of 56 botanicals including herbs, blossoms, roots and fruits as well as Arabica coffee and cacao. The brand recommends drinking it as an ice-cold shot after shaking the bottle well. It’s bottled at 33% ABV. These 10-pack Mini Meisters retail for $9.99 a pack and are available nationwide in April 2021. 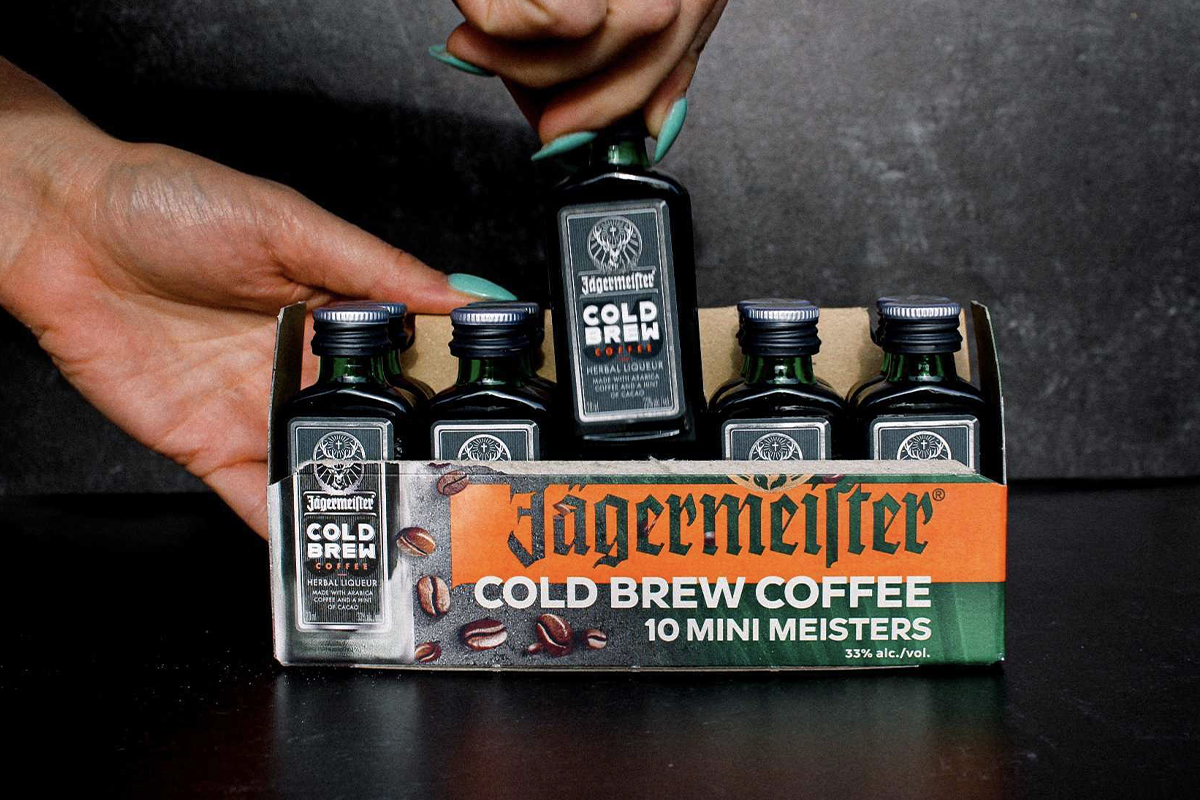 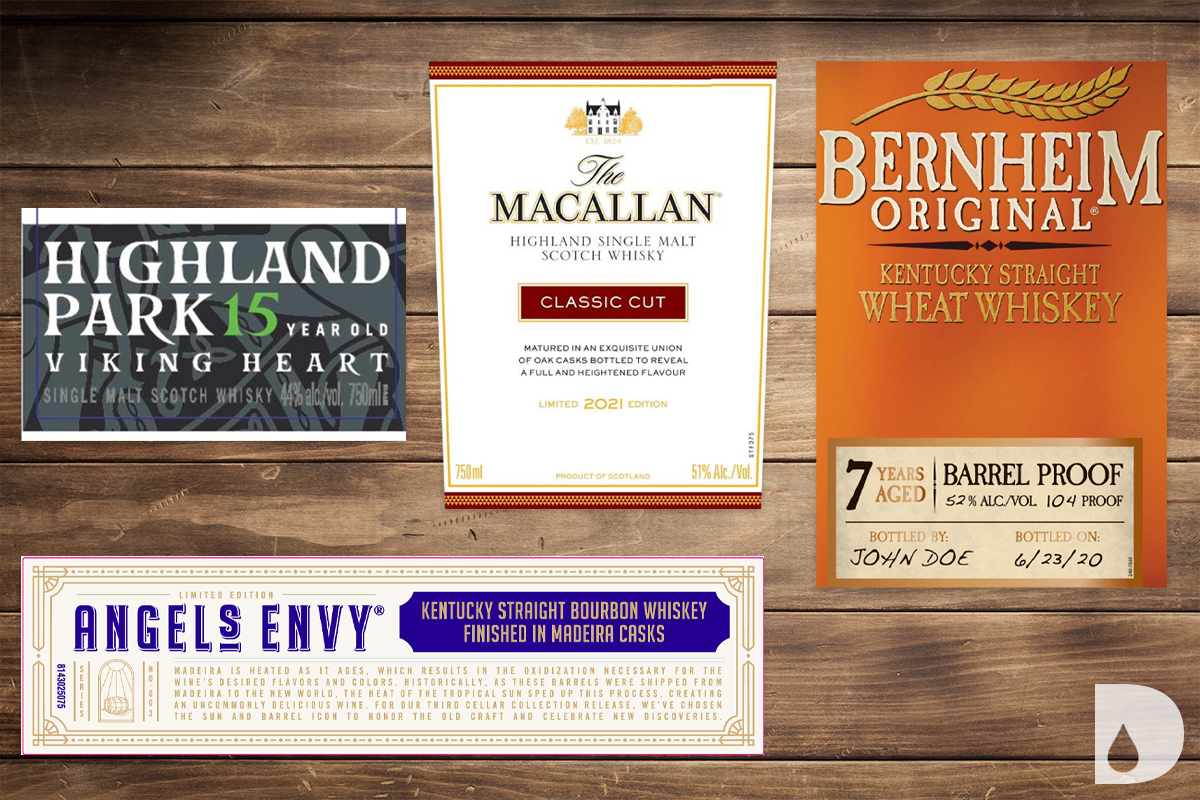 Orkney-based Highland Park repackaged its flagship 12 and 18-year single malt bottlings in 2017 with a new design and added “Viking” moniker. The 12-year was dubbed Viking Honour while the 18-year was called Viking Pride. The whiskies retained their previous flavor profiles.

While the 15-year-old flagship bottling had been re-launched in 2016, it had yet to receive its Viking status. This Viking Heart release appears to be just that, but we’ll see if there’s any difference between the bottlings when the official launch is disclosed.

When Bernheim Original Wheat Whiskey was first introduced into the market in 2005, it was the first wheat whiskey released in the US. Notably, in spring 2014 the brand added instead of removed an age statement of seven years to its label.

This is bottled at barrel proof and still will retain the age statement of 7 years.

The Macallan first launched its Classic Cut annual limited release in 2017. This series features single malt bottled at a higher proof than their flagship bottles.

This marks the fifth release in The Macallan annual limited edition series. Like the 2020 edition, the bottling includes single malt which was aged in American oak ex-bourbon barrels in addition to the brand’s traditional European oak sherry-seasoned casks.

The Kentucky bourbon brand first launched its Cellar Collection series in 2019 with its Oloroso Sherry Cask release. They followed that release with a Tawny Port finish last year.

The featured finishing cask for this bourbon is Bual Madeira, a medium-sweet style fortified wine from Portugal.

Ready to grab a bottle of Stellum Bourbon? 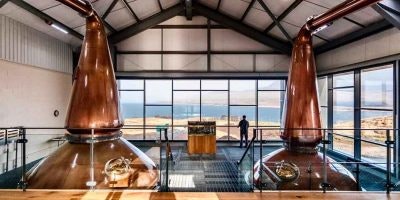 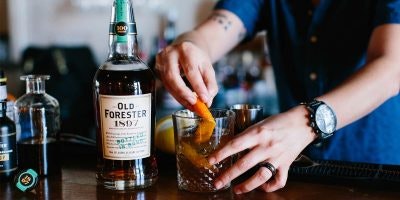 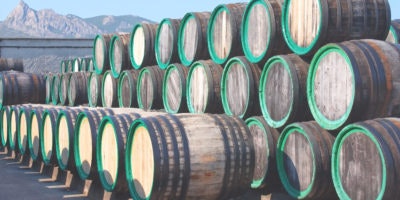