Guide to Pairing Whiskey and Food at Home

While even the most casual wine drinker will be accustomed to pairing wine with food, most whiskey drinkers don’t commonly pursue the endeavor. There are several false notions fueling this, namely that whiskey simply won’t pair with food. And if it does, perhaps such a pairing is too difficult to properly and consistently execute. With the right insight though, you’ll see it’s incredibly easy to begin dabbling. We’ve assembled a few tips for pairing whiskey and food right in your own home. Soon enough you’ll wonder why you weren’t always putting your whiskey to use in this fashion.

Guidelines for Pairing Whiskey and Food

Perhaps few others have the depth of experience on the matter as Ewan Morgan, Diageo Reserve’s national program director. He has put together a multitude of whiskey pairings over the years. Morgan argues that while there aren’t strict doctrines which must be followed, there are at least helpful guideposts you can rely upon for reference. “There are some very reliable rules of thumb that can help steer any budding or intrepid gastronaut through the process,” he says.

The most sensible place to begin is by evaluating the characteristics of a given whiskey. “When I conduct any type of pairing, harmony is what I strive for, therefore I tend to focus on the overall flavor profile of the particular whiskey and complement it with dishes that accentuate similar flavor profiles,” says bartender Shawn Chen of RedFarm.

Building on that idea, one of the easiest ways to sort through your whiskeys will be by considering not only whiskey style, but more specifically, cask type. “Bourbon or ex-bourbon casks will typically provide sweetness – a lot of vanilla, and, in older variants, a tropical fruit character – making it ideal for lighter dishes or desserts,” Morgan says. “Ex-sherry European casks will deliver a more robust rich fruity, tannic palate. So lighter foods can sit in ‘Camp Bourbon’ as opposed to ‘Camp Sherry’ where the bigger flavors may reside.”

It may also prove useful to consider overall categories of food which may lend themselves particularly well to whiskey pairings. “I know it’s been done to death, but cheese!” Morgan says. “There’s a gargantuan gamut of flavors and textures to match with and a huge amount of information is readily available.”

Along with cheese, desserts are certainly common territory for pairings. “I think whiskey goes amazing with desserts and sweet dishes—especially if it’s an American rye or a peated Scotch,” says Anthony Baker, a consulting bartender in New York. “The dryness offsets the sweetness from desserts so beautifully, while the underlying flavors of whiskey maturation tends to complement the dominant flavor in the desserts.”

Meaghan Dorman of Dear Irving on Hudson agrees wholeheartedly with such sentiment. “I wouldn’t want to layer on sweet over sweet but instead make it interesting to go between both,” she says. “I would go for a rye with a sweeter dessert, like Tiramisu, because that hint of spice would balance out the sweet. Rye has notes of hazelnut, vanilla, toffee that would go well but the dryness and spice would provide a nice balance.”

While there are common categories to fall back on, such as cheese and chocolate, you don’t have to restrict yourself, either. “There’s a whiskey that will enhance pretty much any food,” says Paula Lukas, a consulting bartender in New York. “Think of the flavor profile of the food and go from there, and work towards enhancing the flavor of the food not competing with it.” Chen, for instance, says his top three food partners for whiskey would be smoked meat, oysters and tartares, and stone fruit-based desserts.

Just as important as knowing where to start with pairing whiskey is knowing what to avoid. The list of mistakes in this department may be larger—and more common—than you might expect.

One such mistake is simply in how you’re serving the whiskey itself. “You don’t always have to drink whiskey neat or on the rocks,” reminds Masahiro Urushido of Katana Kitten. “I really like the highball. Not only does it make the whiskey lower in alcohol, but the nice carbonation and dilution brings out more flavor as well.”

While complementary notes are essential between whiskey and food, duos with entirely overlapping flavor sets aren’t recommended. Keep in mind that the right points of contrast can elevate the flavor of each individual component. “I think the biggest mistake people make is trying to be too matchy matchy with pairings, I think they should be used to amplify each other,” Dorman says. “They should be friends but not twins.”

Like any type of good partnership, one side shouldn’t entirely overshadow its counterpart. “Don’t let one dominate the other,” Morgan says. 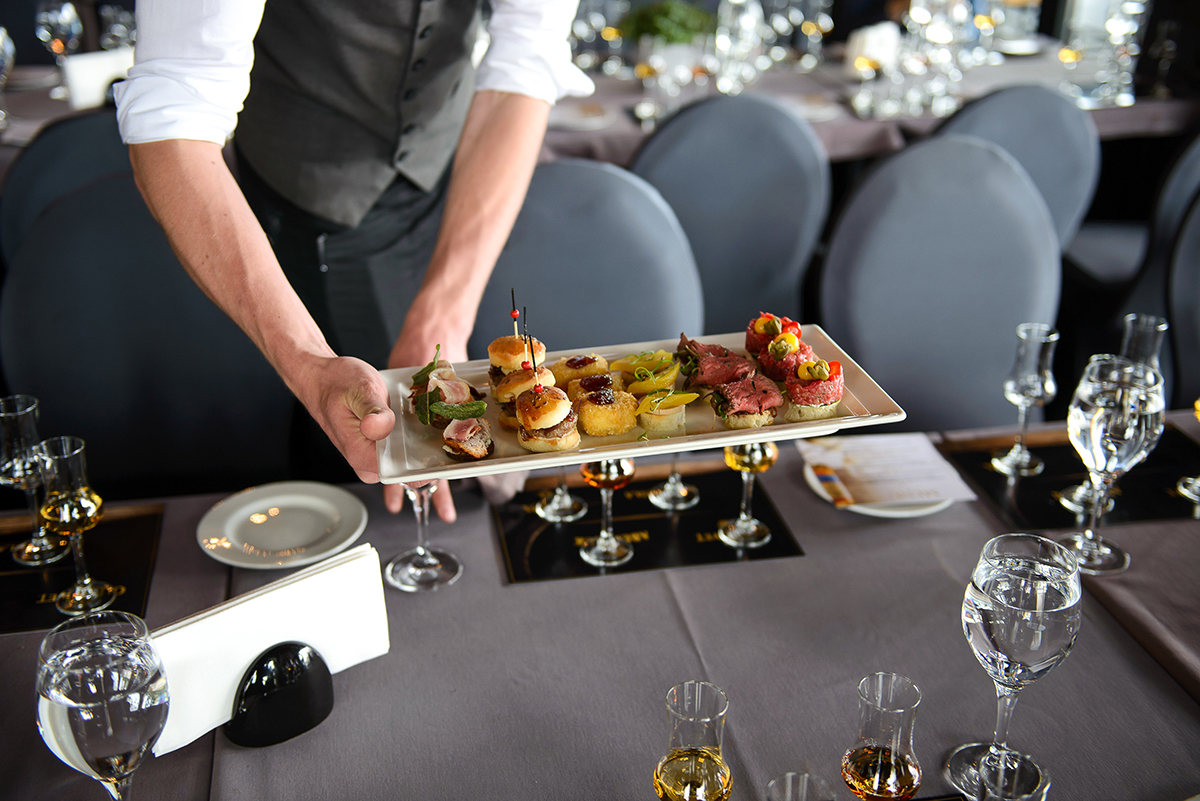 For some quick hitting, tried and true classics, here’s a sampling of some favorites:

“A lemon meringue pie or citrus-forward dessert would go really well with bourbon,” Dorman says. “Bourbon has notes of lemon peel, but the round vanilla notes and hint of toffee would play nicely to go back and forth between the dessert and bourbon.”

“My personal favorite is dry-aged ribeye with a nice single malt from Islay,” Urushido says. He also touts the virtues of chocolate and passion fruit mousse with a Speyside malt, a Japanese whisky highball with fried anchovies, and bourbon with Twinkies.

“I have such a sweet tooth, so I would have to say my ultimate and absolute favorite pairing is crème brûlée with Yamazaki 18.”

“The bit of sweetness from the sherry cask works perfectly with the slight saltiness of the cheese,” Lukas says. She also lists smoked salmon with an Islay Scotch as another go-to, along with sticky toffee pudding with rye.

“The Grill from Major Food Group has a lemon cake that is absolutely amazing,” Baker says. “That lemon cake paired with a glass of Four Roses Single Barrel Bourbon neat is my absolute whiskey-to-dessert combination. I dream about it at least once per week. (Note: Dorman & Baker were polled separately, but just as how they outlined a similar approach to dessert pairings above, they saw eye-to-eye on a shockingly clear basis here.)

“I recently made a tiramisu with Mortlach 12 year old and dark chocolate, and paired with a delicious Arabica coffee, which coupled perfectly with the rich mascarpone sabayon cream,” Morgan says. “It was transcendent and at the moment, it’s top of my list!”

Clearly not one to shy away from putting whisky into his food, Morgan also frequently looks to Mexican cuisine: Talisker-infused chili grilled pineapples in tacos al pastor, Dalwhinnie-infused butter with elote, and “my current favorite: Lagavulin and rich dark chocolate mole.”

The fun, of course, of pairing whiskey and food at home is the sampling and experimenting along the way. When in doubt, simply give things a taste and trust your instincts. “The most important part of your preparation should be your own palate,” Morgan says.”Taste the food, taste the whiskeys.” That’s a plan we all can follow.

Ready to try your hand at pairing whiskey? 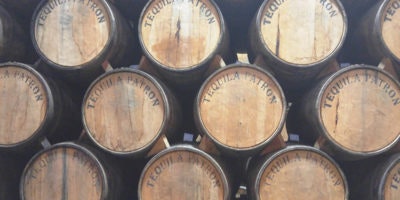 A Closer Look at Patrón’s Premium Tequilas
You know Patrón Silver, but you may not have tried their premium tequilas yet! 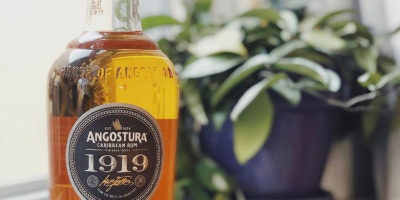 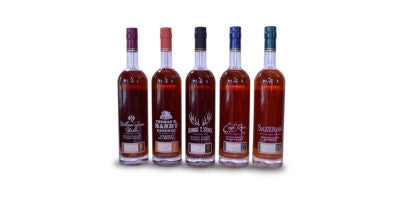