This week we’ve got a few bits of spirits news to share with you. First on the new release front is the Buffalo Trace Experimental Collection 12 Year Wheated Bourbon, Cut At Four Years—say that three times fast! Next is the latest batch of wood finishes for the Speyside distillery GlenAllachie. Also, Appleton Estate has redesigned its packaging and has introduced a new 8 Year Reserve Rum.

In addition to the new releases, we wanted to share some new virtual whiskey experiences to check out over the next week. If you’re able, make sure to buy the whiskeys in advance so you can sip along while you learn. And we’ve got some more upcoming releases to whet your appetites. Without any further delay, let’s get on to the Friday Roundup for April 24, 2020!

Buffalo Trace Experimental Collection 12 Year Wheated Bourbon, Cut At Four Years is the first Buffalo Trace Experimental Collection release for the brand in 2020. A wheated bourbon recipe first entered a barrel at 114 proof in December 2007 where it remained for four years. Then it was removed and cut with water to bring it down to 100 proof before re-entering the barrel to age for another 8 years. 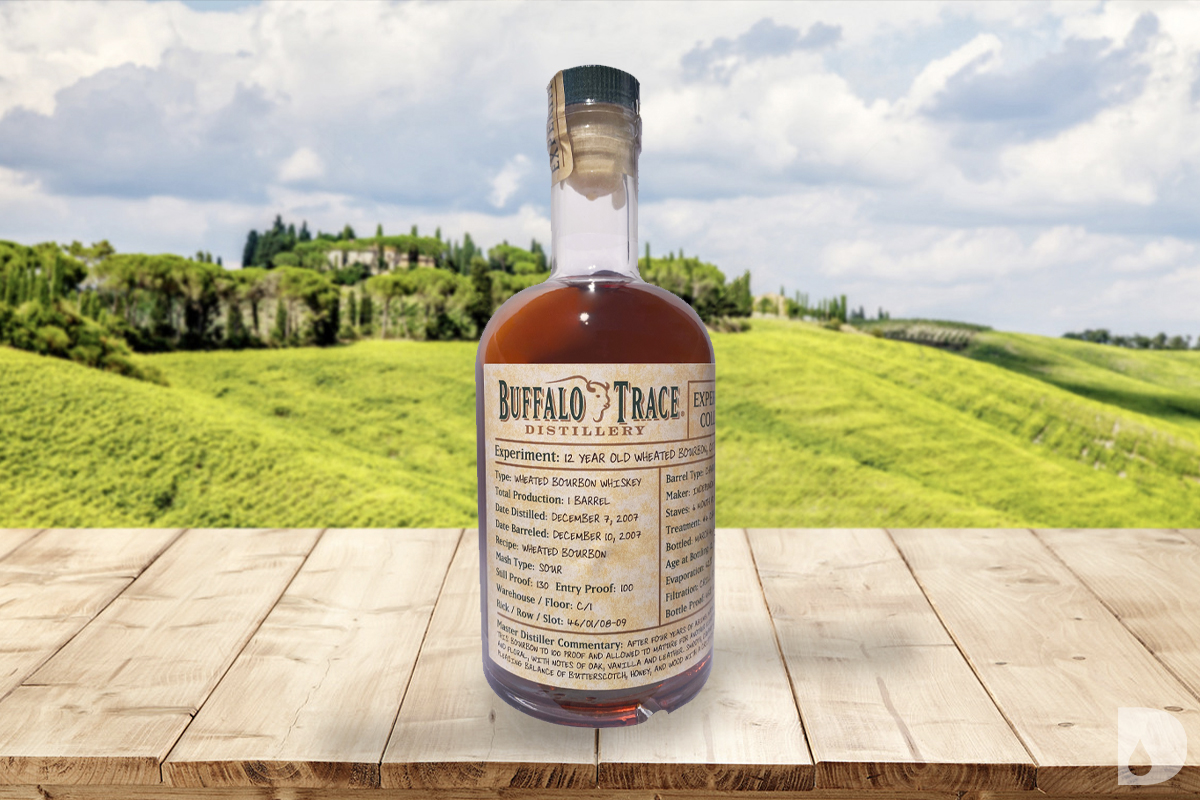 GlenAllachie, the Speyside distillery recently acquired by master distiller Billy Walker and his partners in 2017, has released the second batch of Wood Finishes. Each of the single malts is bottled at 48% ABV without chill filtration. 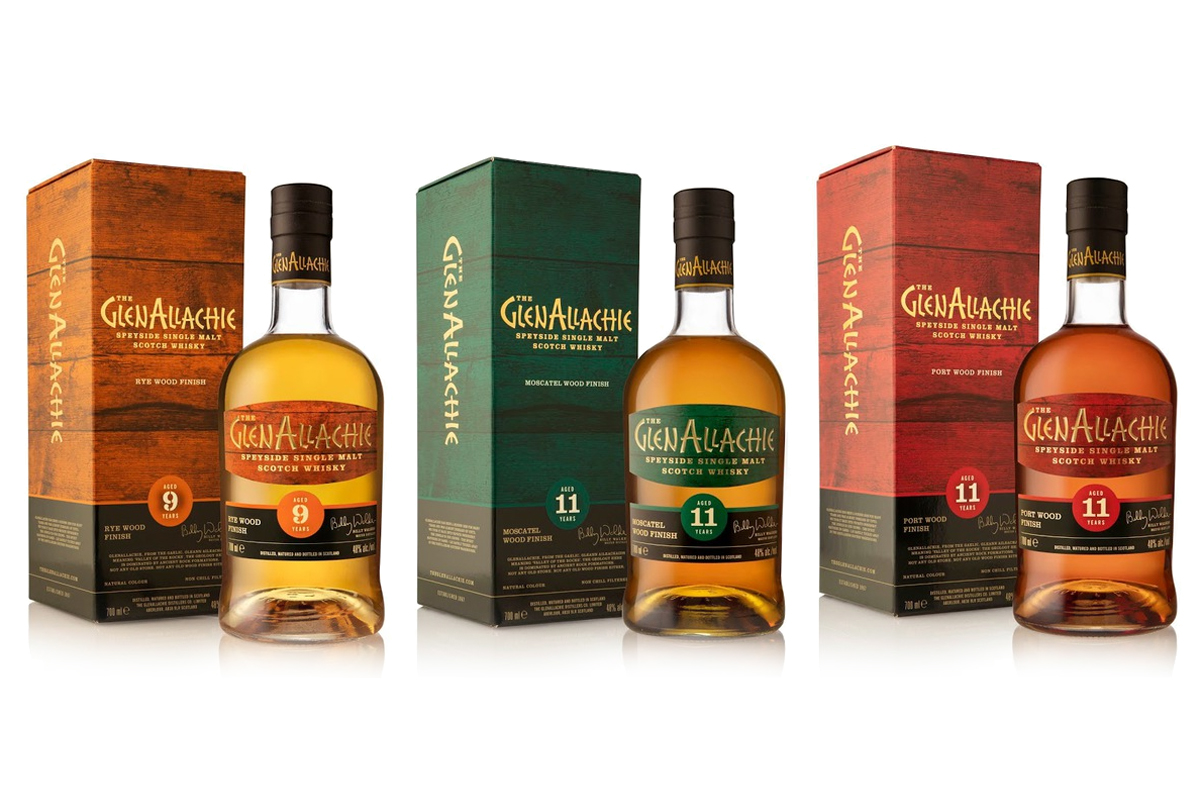 Appleton Estate 8 Year Reserve Rum was crafted by master blender Joy Spence to commemorate the 250th anniversary of the brand. Aged for 8 years, it includes reserve pot still rums in the blend. Bottled at 43% ABV, this 8 Year Reserve Rum is part of a global relaunch for the brand which includes new packaging and a sleeker bottle shape. 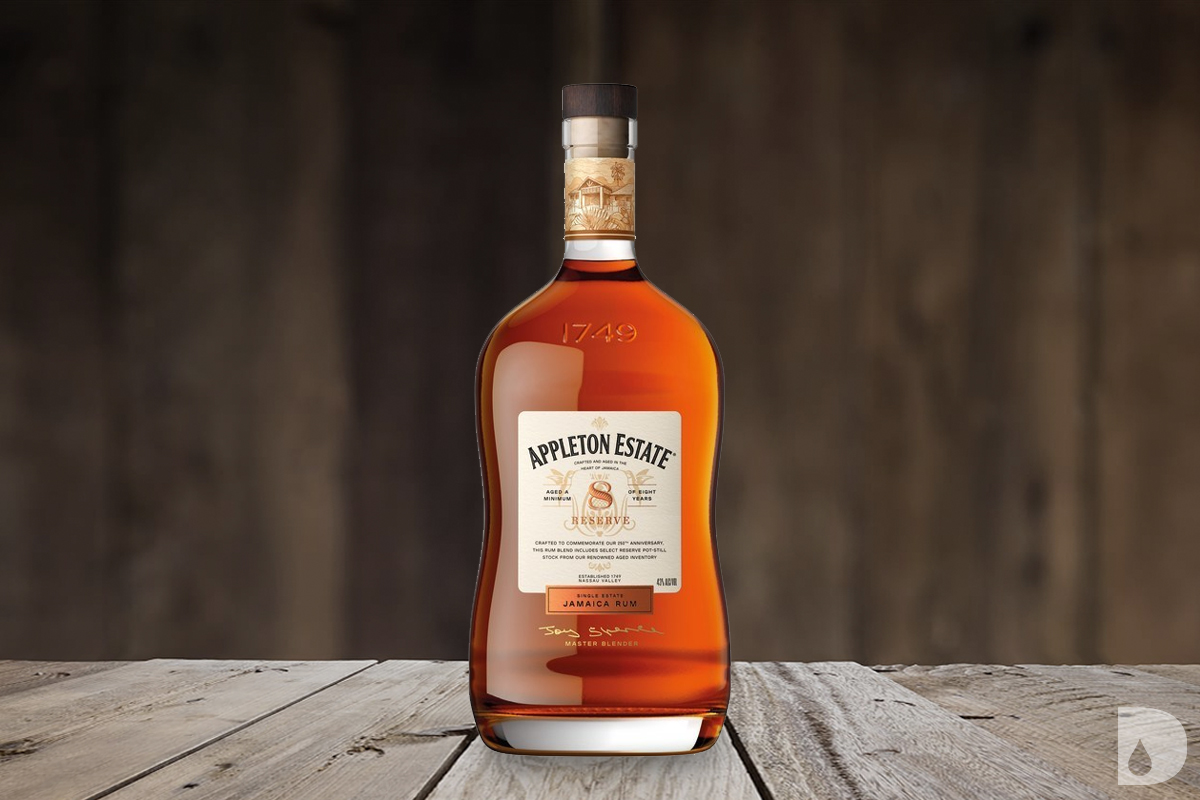 As we mentioned earlier this week, there are numerous virtual whiskey experiences you can join. We’ll continue to monitor the events and let you know which ones we’ll be watching for the coming week.

The first Saturday of May is traditionally the Running of the Roses, better known as the Kentucky Derby. Unfortunately, the event has been postponed until September 5th due to the ongoing crisis. This marks only the second time the event has been rescheduled—the first came in 1945 due to WWII when the event was held in June that year. 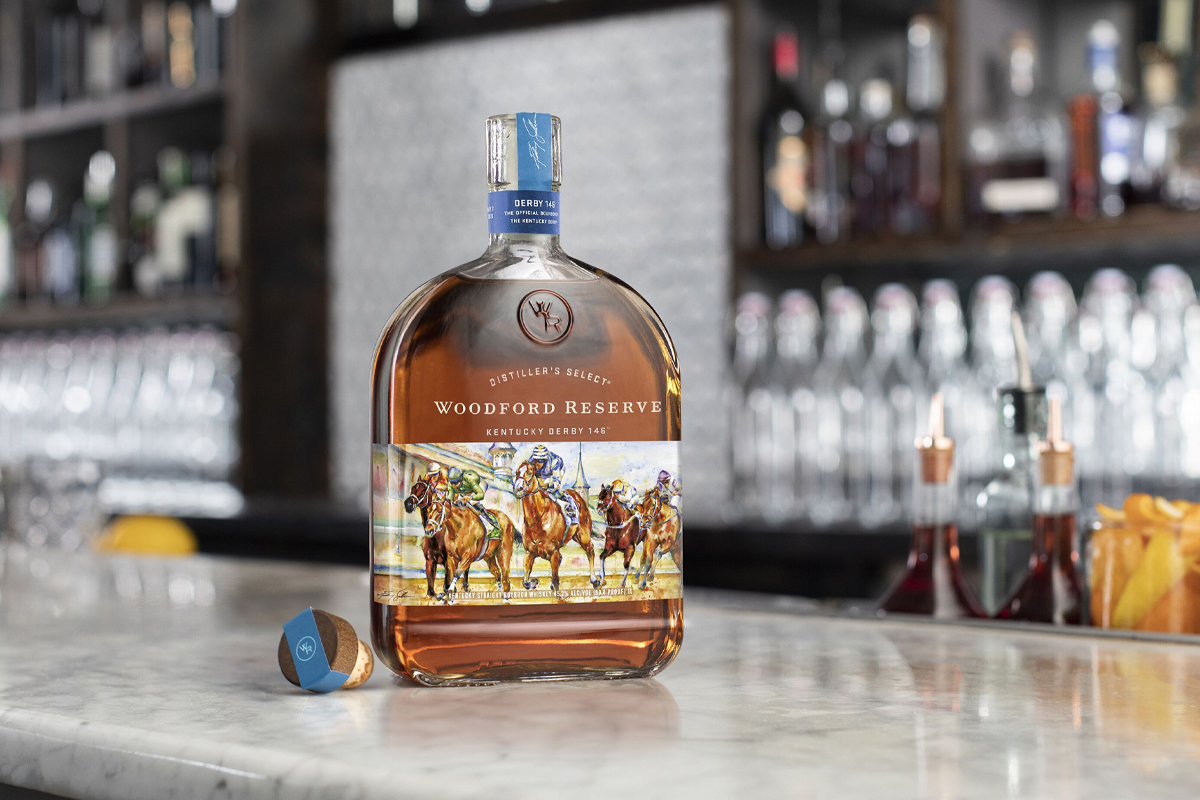 Woodford Reserve—a presenting sponsor of the Derby—and Churchill Downs have joined forces for a day-long at-home celebration while also raising money for those in need due to the pandemic. They will both be presenting unique content on the Kentucky Derby’s social media (Facebook, Twitter and Instagram) that day followed by the re-airing of the 2015 Kentucky Derby shown on NBC from 3-6pm EST.

Furthermore, the NBC broadcast will feature Churchill Downs’ first ever virtual horse race: The Kentucky Derby Triple Crown Showdown. This computer-simulated version of a race will feature all 13 past Triple Crown Winners.

Beginning on April 30th, fans will be able to select their favorite horse to win while joining Churchill Downs in making a charitable donation to COVID-19 emergency relief efforts. All participants who select the winning horse will be entered to win the ultimate Kentucky Derby 146 VIP Experience. Visit KentuckyDerby.com for more information.

If you’re missing your pub quizzes, how about a virtual happy hour which tests your Prohibition knowledge and a chance at prizes? Join in every Friday night from 7-8 pm EST on the George Remus Facebook page. Each week will test your knowledge and will feature a different city with local bartenders creating George Remus Bourbon recipes.

Following the success of the past couple of weeks’ virtual tastings, the Seattle whiskey brand has scheduled more virtual whiskey events. Every Thursday (Nerd Day) and Friday (Happy Hour) through April and May, master distiller Matt Hofmann for Westland Whiskey will host different guests from around the whiskey world. Start time is at 4pm PST on Westland’s Instagram. Check out their page for a list of the guests to come. 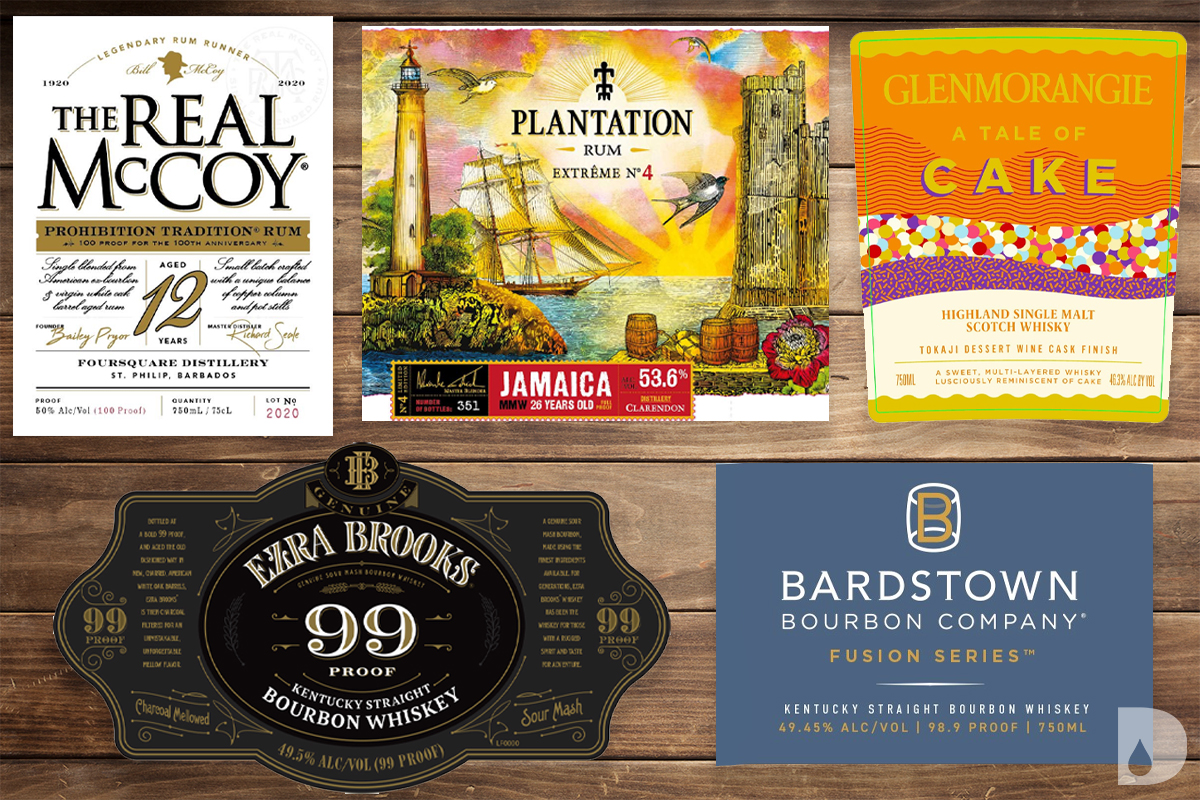 This looks to be the oldest official bottling of Ardbeg in over a decade.

What we know: This is a 25 year single malt from the Islay distillery. It is non-chill filtered and bottled at 46% ABV.

This looks to be the first peated whiskey release under the Teeling brand. Named after the area in Dublin behind the distillery which was formerly home for an abundance of malting houses.

What we know: It’s a peated single malt aged in ex-bourbon and ex-Sauternes casks. It’s bottled without chill filtration at 46% ABV.

Glenmorangie A Tale of Cake

This is a festive label for a no-age statement release.

This will be a permanent addition to the Drumshanbo portfolio following the Inaugural single pot still release.

What we know: It’s a single pot still made from malted and unmalted barley and Irish barra oats. It aged in Kentucky bourbon and oloroso sherry casks and is bottled at 43% ABV.

It’s a new proof for the Kentucky straight bourbon brand which already has 80 proof and 90 proof versions.

What we know: It’s a Kentucky straight bourbon bottled at 99 proof.

This is the third batch in the Fusion Series for the Louisville brand.

What we know: It’s a blend of three Kentucky straight bourbons, one of which is 13 years old. The other two were distilled by Bardstown Bourbon Co. and are only 3 years old each.

This new Extrême release from Maison Ferrand is the oldest one yet.

What we know: It’s distilled at Clarendon distillery in Jamaica. It aged for 25 years in ex-bourbon in Jamaica and for one year in France in ex-cognac before bottling.

This limited edition release from the Barbados brand marks 100 years since the beginning of Prohibition.

What we know: It’s a single blended rum (distilled at one distillery; a blend of pot and column still rums). It’s aged for 12 years in ex-bourbon and virgin oak and bottled at 100 proof.

European Whisky: Beyond Scotland & Ireland
It’s the era of enlightenment for whisky in Europe